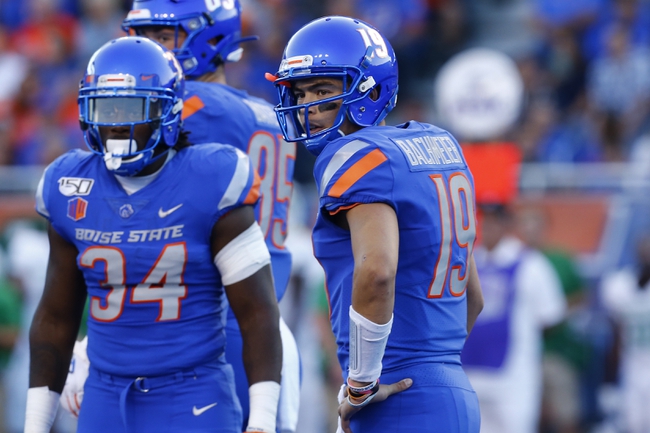 The Boise State Broncos have a great opportunity for another double-digit-win campaign in the 2020 college football season.

Last season, Boise State had an impressive football campaign that ultimately ended in disappointment. The Broncos went 12-2 overall and 8-0 in the Mountain West (winning the conference championship), but fell in the Las Vegas Bowl 38-7 to Washington. In 2020, Boise State will look to defend their MWC title and bag a high-profile bowl victory to legitimize themselves on the national stage. Check back all season long for free college football picks and college football predictions at Sports Chat Place.

Let’s take a closer look at Boise State’s current status and break down their chances at hitting double-digit wins this season.

Boise State rolled along very well during the 2019 season, and lost only the regular-season matchup versus BYU 28-25. Outside of a few stumbles during the year, the Broncos offense was on point and routinely scored over 30 points in almost every game. The result was an 8-0 record in Mountain West play for the first time since Boise State joined the conference in 2011.

This season, Broncos head coach Bryan Harsin retakes the helm for his seventh year. His crew will have some turnover to deal with, including this season’s NFL Draft departures. OL Ezra Cleveland, LB Curtis Wagner and WR John Hightower were each selected. This will also be a key developmental year for quarterback Hank Bachmeier. Receivers like Khalil Shakir (who is probably the top target left on the roster now that Hightower is gone) will need to step up this season as well to keep that offense humming along.

Provided Boise State plays to their potential, there’s a path to 10 or 11 wins this season. There are three key games early in the schedule: at Air Force, Florida State and at Marshall. If the Broncos can roll through those and go into the bye week 5-0 or even 4-1 the team will be set up nicely for the back end of the schedule. The BYU game and a tough trip to Wyoming stand out as key points otherwise.

Pick: I’m taking the over. I’m pretty high on Boise State, who seem to be competitive just about every season. Provided the team can get some wide receiver depth out of the new arrivals and cobble together a solid offensive line, the Broncos offense should be quite potent once again—and that will win a lot of games on its own. The games heading into mid-October will all be crucial, but if Boise can withstand that, we should se another MWC championship appearance for the Broncos.