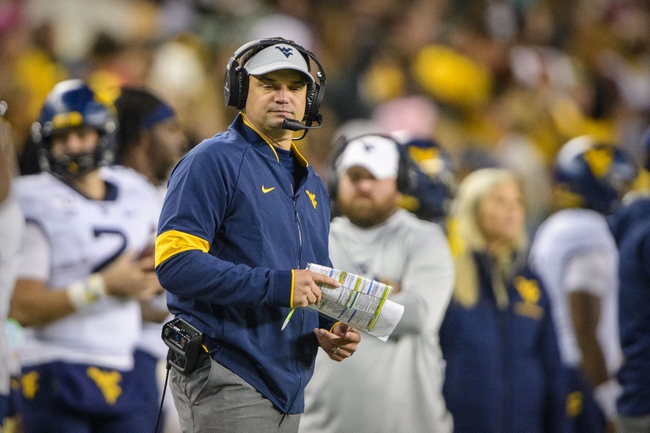 West Virginia ended up with a pretty disappointing football season in 2019. After a fast start the Mountaineers struggled to a 5-7 finish, going 3-6 in a competitive Big 12. In 2020, West Virginia will attempt to reestablish themselves in the conference and if all goes well maybe even make a bowl game. Get Free College Football Picks and College Football Predictions for every game all season long at Sports Chat Place.

Let’s take a closer look at West Virginia’s current status and break down their chances at hitting six wins this season.

West Virginia outperformed a few Big 12 teams in 2019, and finished pretty much around the spot they were projected in the preseason poll. The Mountaineers started out well enough at 3-1, but then were pummeled by conference opponents in their next games (an 0-5 run), getting blown out by double-digits in four of those defeats. West Virginia won road games at Kansas State and TCU late in the season and were playing better in their last three games but it wasn’t enough to get to bowl status.

This will be the second season for WVU head coach Neal Brown, who brings back Chad Scott and Vic Koenning along with new OC Gerad Parker. That crew will have some departures to deal with—notably Kenny Robinson and Colton McKivitz, who were selected in the NFL Draft. They’ll also have to deal with the quarterback situation between Austin Kendall and Jarret Doege, who both spent time as the starter last year. Both QBs had mixed results last season and either could end up starting Week 1. Beyond that, West Virginia really needs to shore up their offensive line in the running game, where they ranked 128th nationally last year with 73.25 yards per game.

Best-case scenario this season for West Virginia is probably around the eight or nine win mark, but that’s probably not likely. The Mountaineers have some dangerous Big 12 squads on the schedule, and they start out with a tricky matchup against Florida State. Things start getting real in October, with road games versus Texas and Texas Tech sandwiched around a TCU matchup.

Pick: I have to go under here. West Virginia is still trying to figure themselves out, and don’t quite have the playmakers (let alone an established quarterback) to contend with the offense of the other Big 12 teams this season. Plus the schedule looks really difficult on paper. After the bye week is another tough gauntlet of solid teams, and I don’t see West Virginia being strong enough to contend with any of them. Seems like another rebuilding year for the Mountaineers.