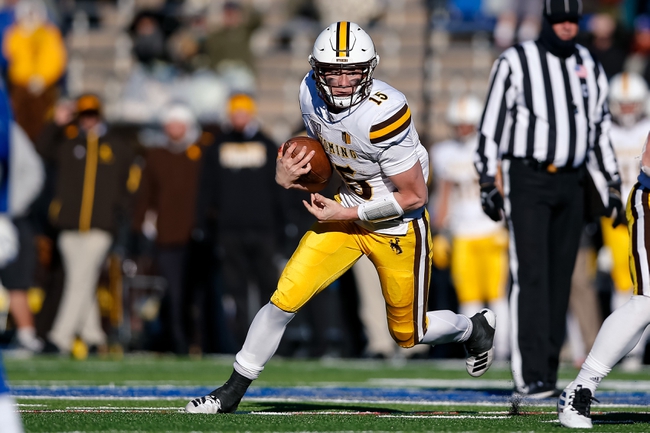 Wyoming turned in a pretty solid football campaign in 2019. The Cowboys finished 8-5 overall and earned a trip to the Arizona Bowl, where they beat Georgia 38-17. In 2020, Wyoming will try to gain some ground in a competitive Mountain Division and bag another bowl game victory. Get Free College Football Picks and College Football Predictions for every game all season long at Sports Chat Place.

Let’s take a closer look at Wyoming’s current status and break down their chances at hitting seven victories this season.

Considering the talent in the Mountain Division last year, Wyoming put up a pretty good record. The Cowboys finished 4-4 in conference play, with Utah State, Air Force and Boise State—all really good teams—ahead of them in the standings. Only four teams in the Mountain West had better records last season than Wyoming did, and just one of the Cowboys’ losses in 2019 came by more than seven points (20-6 at Air Force).

This year, Wyoming brings back head coach Craig Bohl and offensive coordinator Brent Vigen, each in their seventh year. New DC Jay Sawvel joins the team as well. That crew will deal with the usual turnover; most notably linebackers Logan Wilson and Cassh Maluia were selected in the NFL Draft. One other interesting scenario leading up to the season will be at the quarterback position; Levi Williams played very well in his first career start at the Arizona Bowl, throwing for three scores and rushing for another. Sean Chambers is also making his way back from injury.

As for the schedule, there aren’t a lot of soft spots there, so Wyoming will have to come out of the gate strong. Wyoming has a very tough stretch right out of the gate at Louisiana, then Utah, then at Ball State before heading into the open week. San Diego State, Air Force and Boise State also loom large further down the line.

Pick: I’m going over here, but it’s really close. There are certainly seven wins (or more, if the Cowboys play well) on the schedule, but nothing will be easy. Wyoming can’t afford to screw up home games versus Weber State, Utah State and Utah or else they’ll have to rely on more difficult matchups like Air Force and Boise State in order to become bowl eligible. The Mountain West is going to be fierce again this year, so I don’t think the Cowboys will reach quite as high as they did in 2019, but seven wins is certainly doable—and should be considered pretty good in a competitive conference like this.