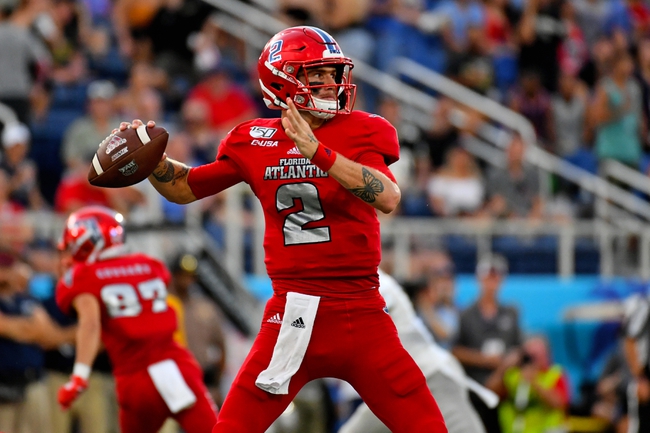 Let’s take a closer look at Florida Atlantic’s current status and break down their chances at hitting nine wins in 2020.

There’s really not a whole lot to be disappointed with when it comes to the Owls’ 2019 campaign. The team was projected to finish third in the division prior to the season, but shattered pretty much everybody’s expectations. FAU dropped their first two games to Ohio State and UCF but impressively went 11-1 the rest of the way, an October 18 loss to Marshall being their only blemish. The scoring was on point for pretty much the entire season, as the Owls boasted a pretty stout offense.

This season, Florida Atlantic will hit the reset button on the coaching staff, as Lane Kiffin is gone and it’s Willie Taggart’s team now. Clint Trickett and Drew Mehringer will run the offense, while Jim Leavitt takes over as defensive coordinator. The new crew will need to tweak things a little on the defensive side, but should be pretty well set up offensively with guys like QB Chris Robison and running back Malcolm Davidson. The returning players in impact spots will be a great lift for this newly-installed coaching staff.

Schedule-wise, Florida Atlantic opens up with a pretty rough-looking road trip versus Minnesota, but other than that it seems like a pretty manageable slate of games. The Owls do have a few bullet points for big matchups however, like going to Southern Miss and Marshall, as well as a late-season trip to FIU. That said, if the team can play consistently the whole season, the potential for double-digit wins here is pretty good.

Pick: This is a tough one, but I’m going over. Sure, a lot of things have to go right for FAU this season, which isn’t always a given under a new coaching staff. That said, Taggart and the gang have a lot of pieces to work with, and a few guys stepping up as reliable role-players—and a reasonable defensive performance—will go a long way toward the Owls’ success this season. I think nine wins is doable in this case.