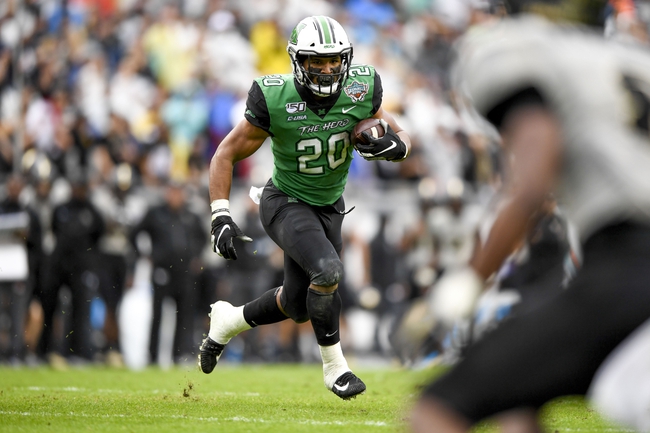 The Marshall Thundering Herd are looking like they'll be flirting with bowl eligibility again in the 2020 college football season.

Marshall had a decent football campaign in 2019, but it ultimately ended in disappointment. The Herd finished 8-5 overall and 6-2 in Conference USA play, good enough for second place in the East Division. Marshall earned an invite to the Gasparilla Bowl, where they fell to UCF 48-25. This season, the Herd will attempt to make some noise in the conference and get a bowl game victory at year’s end. Check back all season long for free college football picks and college football predictions at Sports Chat Place.

Let’s take a closer look at Marshall’s current status and break down their chances at hitting seven wins this season.

Eight wins is usually a pretty decent season, but a lot more was expected of Marshall in 2019. The team was projected to finish first in the East Division but couldn’t catch Florida Atlantic, who ended up with an 11-3 campaign. The Herd were stymied by a pretty tepid 2-3 start as well, scoring a max of 14 points in all of their losses. The good news is that Marshall recovered to win five straight games starting in mid-October, beating FAU on the road in one of those.

Head coach Doc Holliday returns to the Marshall sideline for his 11th season, while Tim Cramsey at OC (third season) and Brad Lambert/JC Price at DC (second seasons) fill out the top end of the coaching staff. That crew should have a pretty solid returning offense, headlined by QB Isaiah Green, RB Brenden Knox and five seniors on the line. The Marshall defense has been top 60 in SP+ for three straight years, and if that unit can return to form in 2020 the Herd will be putting out a very well-rounded team.

There are a few potential pitfalls on Marshall’s schedule this season, but if the team can get off and running with a good rhythm early the wins are there as well. The Herd have a couple of tough early home games versus Pitt and Boise State, then during October there are three road matchups in a four-game stretch. Provided Marshall can power their way through all that, November doesn’t look all that bad on paper.

Pick: I like the over here. I’m pretty high on Marshall this year; they should be returning a good team to the field under veteran leadership. If everything goes perfectly, this team could flirt with double-digit wins and maybe even a conference title. That scenario is probably a little optimistic,  but I don’t think Marshall will have too many issues hitting seven victories in 2020.