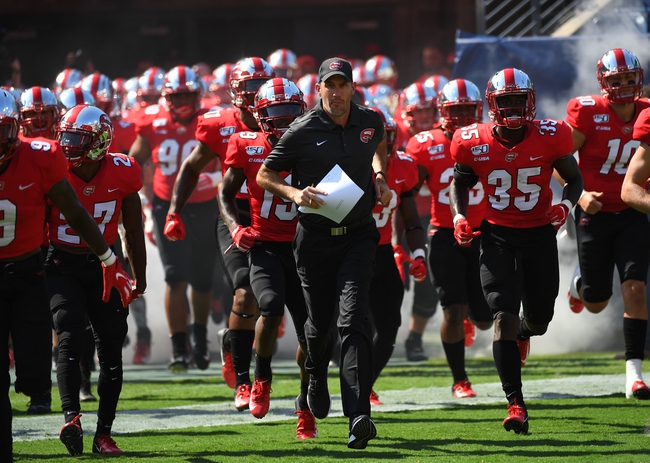 The Western Kentucky Hilltoppers are poised for another strong campaign in the 2020 college football season, just like last year.

Western Kentucky had a pretty solid football season in 2019. The Hilltoppers finished at 9-4 overall and 6-2 in Conference USA play, finishing third in the East Division. That effort was good enough for an invite to the First Responder Bowl, where Western Kentucky defeated Western Michigan 23-20 on a thrilling last-second field goal. This season, the Hilltoppers will attempt to replicate that success, compete in the CUSA standings and bring home another bowl game win. Check back all season long for free college football picks and college football predictions at Sports Chat Place.

Let’s take a closer look at Western Kentucky’s current status and break down their chances at hitting eight wins this season.

Western Kentucky performed pretty admirably in a competitive conference last season, managing to notch the second-best record in CUSA play. It wasn’t enough to overtake the likes of Florida Atlantic or Louisiana Tech in the win column, but a very solid effort nonetheless, especially after an abysmal 3-9 season in 2018.

WKU head coach Tyson Helton will take the reins once again for his second season, and his staff will attempt to replicate the positive results of last year. The Hilltoppers’ defense was one of their most important components last season, and the great news there is that the team will be bringing back just about every player from that unit (outside of a few notable names). Western Kentucky will also be getting back QB Steven Duncan after injury, so we’ll see what kind of chemistry he can develop with junior wide receiver Jahcour Peterson, who should be an integral part of the squad himself.

Western Kentucky has three big road games in the first half of the 2020 season, and those matchups will go a long way toward setting the tone for their season. The Hilltoppers travel to Indiana and Louisville, then go play Middle Tennessee to start out October. Beyond that, WKU has another big road game at Florida to begin November, so their away-from-home play will be key this season.

Pick: I like the over here. Assuming Western Kentucky can get some consistent quarterback play I’m pretty high on the team this season. The Hilltoppers have enough weapons on the offensive side of the ball to be effective, and the experienced defense should be able to take care of the rest in most games. WKU will have some stumbles along the way—there are some major opponents on the schedule this year—but I think eight wins is doable for the Hilltoppers this season. We should be looking at another bowl game appearance here.