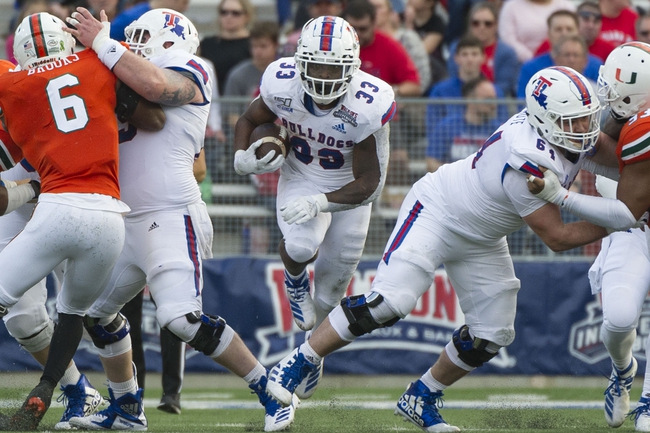 Louisiana Tech had a pretty darn good football season in 2019. The Bulldogs finished 10-3 overall and 6-2 in Conference USA play, co-champions of the West Division and winners of the Independence Bowl 14-0 against Miami-FL. In 2020, Louisiana Tech will once again try to compete in the division and bring home another bowl game victory. Get Free College Football Picks and College Football Predictions for every game all season long at Sports Chat Place.

Let’s take a closer look at Louisiana Tech’s current status and break down their chances at hitting eight wins this season.

Louisiana Tech did better than expected last year, despite opening up with a blowout loss to Texas. The Bulldogs went on a run from there, winning eight straight before consecutive road losses to Marshall and UAB stymied LA Tech’s chances at a solo division victory and prevented an appearance in the conference championship game. The Bulldogs put up some impressive offense in their wins last year as well, scoring 42 or more in four games straight at one point.

Louisiana Tech retains their coaching crew from last year: head coach Skip Holtz in his eighth season, OC Todd Fitch in his fifth, and defensive coordinator in his second. That group has a pretty sizable class of three-star recruits incoming, which will help bolster the team’s ranks for years to come. One key decision the staff will have to deal with is the departure of QB J’Mar Smith (9,523 career pass yards) and his replacement, which could be sophomore Aaron Allen. Outside of that, RB Justin Henderson should have a big role in the 2020 LA Tech offense as well.

Looking at the schedule, the wins are certainly there, but the potential pitfalls are as well. Louisiana Tech opens up with road games at UNLV and Southern Miss right out of the gate, then a road game at Baylor to close out September in what’s a very difficult first part of the slate. The Bulldogs are going to have to be road warriors this season; there won’t be many opportunities for the team to get in a home groove, and they’ve got to finish things out with three road games in four outings.

Pick: I’m going over, but this is another tight one. It would be only natural for Louisiana Tech to take a step backward as they retool some key positions this year, and if the Bulldogs can keep the loss minimal I think they still have a good shot at eight wins. Provided LA Tech can get into the bye week with a couple of victories, then go on a nice run in the conference games like last season, the Bulldogs should be competing for the division title by year’s end.