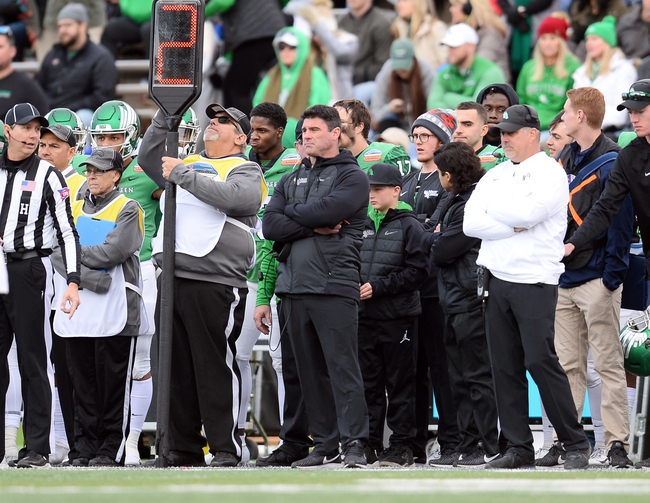 North Texas had a pretty rough football campaign in 2019. The Mean Green finished at just 4-8 overall and 3-5 in Conference USA play, leaving the team in fourth place in the West Division after a disappointing season. In 2020, North Texas will attempt to right the ship and if all goes well the Green will be in contention for another bowl game appearance. Get Free College Football Picks and College Football Predictions for every game all season long at Sports Chat Place.

Let’s take a closer look at North Texas’ current status and break down their chances at hitting six wins this year.

Despite being favored to win the West Division prior to the 2019 season, North Texas sputtered for pretty much the entire year, opening things up at just 2-4 through a half-dozen games. The Mean Green were competitive in about half of their losses during the season, but overall it was a big letdown with plenty of embarrassing on-field performances sprinkled throughout the campaign.

Fifth-year head coach Seth Littrell will attempt to get the Mean Green back on the right track in 2020. He’ll be joined by OCs Tommy Mainord (second year) and Mike Bloesch (first year), along with first-year DC Clint Bowen. That crew has their work cut out for them this season, as the secondary loses four of the team’s top six tacklers from last year, and the offensive line loses five of their seven main guys. North Texas’ run defense should be pretty good but they may struggle against the pass. On the other side of the ball are QB questions; sophomores Austin Aune and Jason Bean are options there and will go a long way in determining the Mean Green’s identity in 2020.

Schedule-wise, nothing is really cut and dried here. There are road trips to Texas A&M and Houston in the first four games, as well as a big matchup versus SMU. Following the bye week (and by that time we should have a good idea of North Texas’ chances), there are big road games versus UTEP, UAB and UTSA, as well as an intimidating matchup versus a Louisiana Tech team that should be decent this year.

Pick: I’m going under; at this point I just don’t see it. It may take another season or two for North Texas to recover from the letdown of 2019, and with a revamped coaching staff, a new QB and some major contributors gone from both sides of the ball, it’s going to be difficult for the Green to find any traction this year. I expect some nice wins, competitive games and solid progress, but fewer than six wins just seems to be a more likely scenario.