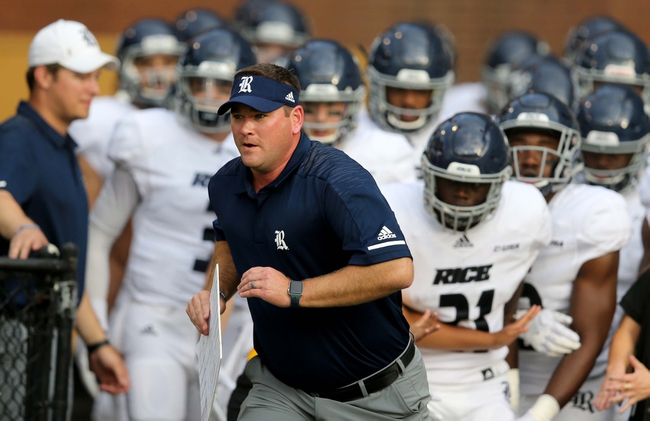 The Rice Owls have a lot of work to do in order to qualify for a bowl berth in the 2020 college football season, but they have a legitimate shot.

Rice had a pretty disappointing football season in 2019, going just 3-9 overall and 3-5 in Conference USA play. The Owls are projected to take a step forward in 2020 however, and if all goes well Rice could be flirting with a bowl bid at season’s end. Check back all season long for free college football picks and college football predictions at Sports Chat Place.

Let’s take a closer look at Rice’s current status and break down their chances at hitting six wins this year.

Glancing at 2019’s overall record is pretty bad, but there are also some silver linings. Rice finished just 3-5 in the conference, one spot out of the basement. However, the Owls’ wins came in the final three weeks of the season following a nine-game losing streak to open things up. The optimist would say that Rice finally found their rhythm late in the year, which could indicate a big step forward in 2020.

In any case, Mike Bloomgren is back in the head coaching role for his third season, as are OC Jerry Mack and DC Brian Smith. They’ll have to deal with some turnover from last year’s team that broke out late in the season, but also have a strong secondary returning. If the Owls can get out to some early leads and put the clamps down on defense (which is what they intended to do last year, getting better as the season went on), Rice could do some conference damage in the 2020 campaign.

Rice will be tested straight out of the gate this season, as they’ve got a road trip to Houston, then have Army, LSU and Marshall looming in the first part of the year. The Owls’ success is likely going to hinge on those big conference games later on, and with a little consistency Rice could have some success there after the bye week. If they're going to become bowl-eligible this season, late in the calendar is where Rice is going to have to shine.

Pick: I have to go under. I would really like to root for Rice this year since they turned into a likable team late last season. That said, the Owls are facing an uphill battle after the departures of some key names, not to mention the absolute gauntlet they have to go through in their first handful of games. Rice will probably struggle early then get better as the season goes along, just like last year. I don't think the Owls will be able to win more than five games, though.