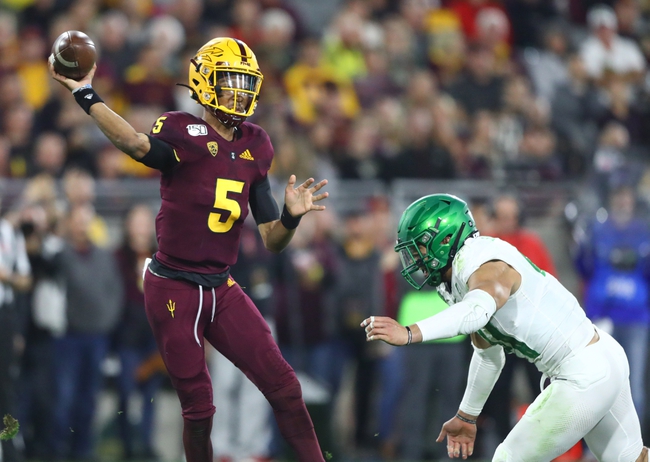 The Arizona State Sun Devils will hope to take another step forward after another step forward year under head coach Herm Edwards, finishing 2019 with an 8-5 record, including a 20-14 win over Florida State in the Sun Bowl. It will be interesting to see how things go in year 3 as Edwards added more NFL-level coaching to his staff by adding Marvin Lewis to look over the defense.

Let’s take a look at Arizona State’s schedule for the 2020 season.

The big question mark for ASU this season is how the Sun Devils will be replacing a lot of the offensive production that is gone from last year’s squad. The leader of the receivers is gone as Brandon Aiyuk is now a San Francisco 49er after leading the Sun Devils with 65 catches last season while the next top receiver, Kyle Williams, signed with the Tennessee Titans as an undrafted free agent. The other issue is in the backfield as Eno Benjamin is no longer at Arizona State after being a 7th-round pick of the Arizona Cardinals. Benjamin had accounted for all 13 touchdowns and over 1,000 rushing yards for the Sun Devils last season.

The good news is that Jayden Daniels returns after a solid freshman year in which he threw for  almost 3,000 yards with 17 touchdowns and just 2 interceptions. Frank Darby is going to need to emerge as the new deep threat for ASU after recording just 31 catches last season but put up just under 20 yards per catch. The other plus is that 8 of ASU’s defensive starters are back from a team that gave up under 23 poins per game last season and did a good job in terms of stuffing the run. Arizona State also held half of their opponents to 17 points or less last season.

The win total for Arizona State is set at 7.5 this season and this is one of my teams to watch this year. ASU hasn’t hit eight wins in the regular season since 2014, but 2020 is the year I expect that trend to end. I do think the Sun Devils fall at USC, but going into the bye at 5-1 is very possible and the only two games I see the Sun Devils having issues with would be against a solid Cal team (even if the game is at home) and a road game against Oregon (which still has some retooling of their own to do.). This could easily be a 9 or 10 win team if the receiving corps and running back situation sorts themselves out before then, so I’ll take the over 7.5 wins for Arizona State this season.