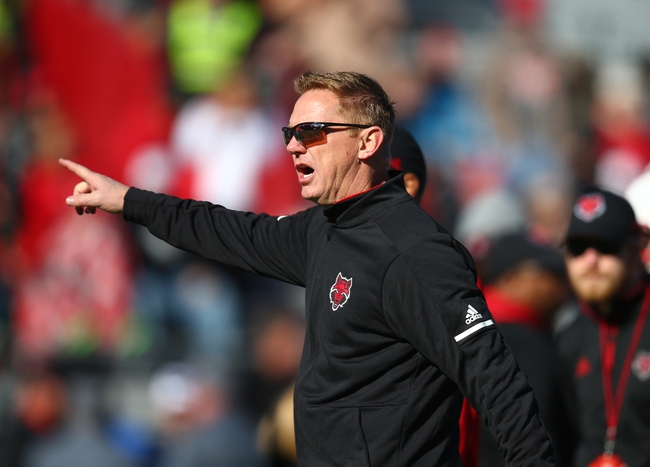 The Arkansas State Red Wolves will be fighting for another bowl game spot in the 2020 college football season after a strong run last year.

Arkansas State put up a pretty solid football campaign in 2019. The Red Wolves managed to go 8-5 overall and 5-3 in the Sun Belt, earning a trip to the Camellia Bowl. Arkansas State took home the win 34-26 against FIU in that one. For 2020, Arkansas State will look to make some more noise in the conference and bag another bowl game victory. Check back all season long for free college football picks and college football predictions at Sports Chat Place.

Let’s take a closer look at Arkansas State’s current status and break down their chances at hitting seven wins this year.

Things didn’t look good for the Red Wolves in the middle of October last season. The team was sitting at 3-4 with a group of tricky conference games ahead. It seemed like a lost season. To their credit, Arkansas State banded together and rattled off four straight wins, becoming bowl-eligible before a tight loss 34-30 at South Alabama to close out the regular season. That effort left Arkansas State in second place in the West Division, far behind Louisiana at 11-3 overall, however.

In any case, in 2020 the Red Wolves will once again have Blake Anderson on the sideline for his seventh year as head coach. He’s primed for a solid season, as a lot of key players will be returning to the roster. There's lots of experience and talent here. Arkansas State has QB Layne Hatcher back, and former starter Logan Bonner has recovered from his injury. The team will have a solid offensive line and some big playmakers in Jonathan Adams, Marcel Murray and Brandon Bowling. There’s massive scoring potential with the Red Wolves.

Now, looking at the schedule there are a few looming pitfalls as well; the early part of the season will be difficult for Arkansas State. They’ll open at Memphis, then have a tough road matchup at Michigan a couple weeks later. Right before the bye is a trip to Coastal Carolina, and there are intimidating road trips to Appalachian State and Louisiana afterward.

Pick: I say over. Arkansas State has a really nice roster and a team galvanized under Anderson after a highly emotional 2019 campaign. The offensive potential is massive, and the Red Wolves will need all that ammunition to compete with the likes of Louisiana and App State. If everything goes well, Arkansas State could even flirt with double-digit wins and be in contention for a trip to the Sun Belt Championship Game. Should make for an exciting season in a competitive conference.