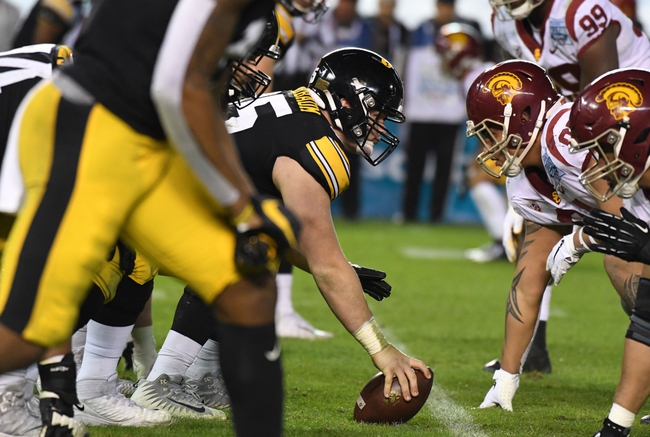 Breaking Down The Iowa Hawkeyes Win Total For The 2020 Season

The Iowa Hawkeyes enter the 2020 campaign fresh off of an 11th winning season in the Hawkeyes’ last 12 seasons, finishing with their first double-digit win total since 2015 after a 10-3 season that saw coach Kirk Ferentz takes his guys to the Holiday Bowl where Iowa picked up a bowl win for the 3rd straight year with a 49-24 win over USC. Now with some turnover in the roster, Iowa will be hard-pressed to stay the course in 2020.

Let’s take a look at Iowa’s schedule for the upcoming season.

The good news for the Hawkeyes is that a bulk of the offense is back, including the backfield tandem of Tyler Goodson and Mekhi Sargent who combined for 1,201 yards on the ground last season. The Hawkeyes could’ve had both tackles from last year’s team declare for the draft, but Alaric Jackson decided to come back to the Hawkeyes for one more season. Ihmir Smith-Marsette and Tyrone Tracy come back to anchor the Iowa receiving corps, which will be much-needed as Spencer Petras is expected to step into the starting pivot role for Iowa.

The other side of the coin though, is that Nate Stanley is gone under center for Iowa and a large chunk of the Hawkeyes starting unit from either side of the ball (more so the defense) is no longer there. Tristan Wirfs, A.J. Epenesa  and Geno Stone are all gone to the NFL, while leading tackles Kristian Welch, DB Michael Ojemudia and linemen Cedrick Lattimore and Brady Reiff are all gone after their eligibility ran out, leading a bunch of holes for Iowa to fill with a tough schedule to fix it on top of.

The win total for Iowa is set at 7.5, and that number is pretty close to dead on for me. With that said, if we break down the schedule, up to the bye week, the games against Northern Iowa and Northern Illinois are probably wins, but everything else is a crapshoot. Getting Iowa State at home is big but I wouldn’t be surprised with a loss there and at Minnesota, Michigan State could be a win as well but I don’t see the Hawkeyes coming back from the road trip at Ohio State and at Penn State with a win. I’m projecting 3-4 wins max at the bye week, and with 4 games left, even at 4 wins, the Hawkeyes would have to run the table to go over. I don’t see them winning that season finale against Wisconsin, so I’ll side with the under as I think Iowa’s best case scenario is 7-5.