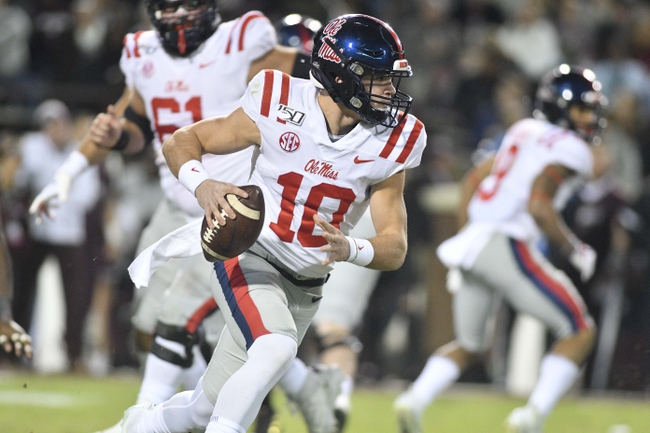 The Ole Miss Rebels will enter the 2020 season looking to get above .500 for the first time since the 2015 season after a 4-8 mark essentially cost Matt Luke his job as head coach of the Rebels.

The 2020 season also begins the mark of the Lane Kiffin age in Oxford after Kiffin agreed to a 5-year, $21 million deal at the end of last season. Kiffin had a successful tenure at Florida Atlantic, picking up two conference championships in three seasons with the Owls. Check back all season long for free college football picks and college football predictions at Sports Chat Place.

Let’s take a look at Ole Miss’ schedule for the 2020 season.

Saturday Sept. 5 vs. Baylor (at NRG Stadium in Houston, TX)

The good news for Ole Miss is that a good chunk of Ole Miss’ production from last season is back, including John Rhys Plumlee who had a solid freshman year at QB for the Rebels, throwing for 910 yards while also rushing for a team-high 1,023 yards and 12 touchdowns. Jerrion Ealy is expected to lead the running back duties for Ole Miss with Scottie Phillips no longer there and Ole Miss’ top three receivers from last year are all back including Elijah Moore who had 67 grabs for 850 yards and 6 scores last season. The defense also improved last season, giving up 26.5 PPG last season, almost 10 full points less than the swiss cheese defense of 2018 that gave up 36.2 PPG and the continued success will be led by leading tackler Lakia Henry who has also returned.

The other side of that coin is that while we have a lot of production back for Ole Miss on offense, the line needs some help as both starting tackles from last year’s team are gone. Ole Miss also has to replace pretty much their whole defensive line and a large chunk of the secondary and looking at the opposition in the first five weeks of the season and it’s going to be a trial by fire on the fly for the Rebels in terms of building their defensive unit for the rest of the season

The win total for Ole Miss is set at 5.5 and that number is really tough in all honesty because I do think that the Rebels lose the 5 toughest games on the schedule, at LSU and Texas A&M as well as Alabama, Florida and Auburn at home. Baylor is a toss-up and Mississippi State at home is a tough test as well. With that said, Ole Miss went 4-8 last season and five of those losses came by one score or less, including a 15-10 loss to start the season against a Memphis team that went 12-1 and a 20-14 game against Auburn who went 9-3. Ole Miss also put up 37 and 31 points against LSU and Alabama, so I think the Rebels are and are going to be a better team than most would give them credit for. I think Ole Miss has a shot to go bowling this year, so I’ll side with the over 5.5 for Ole Miss this season.