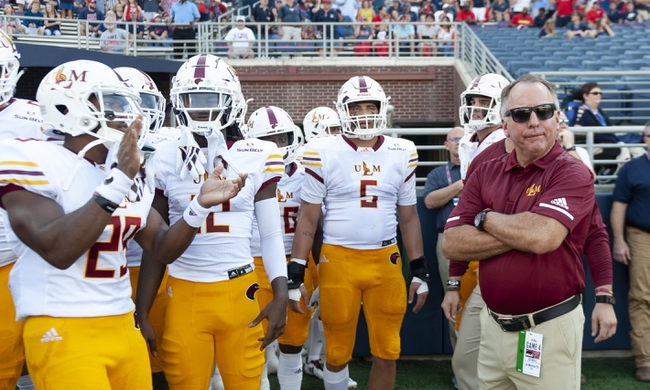 Louisiana-Monroe had a mediocre and ultimately disappointing football campaign in 2019. The Warhawks finished 5-7 overall and 4-4 in Sun Belt play, leaving the team in third place in the West Division and out of bowl game consideration once again. In 2020, UL-Monroe will attempt to make some more progress in the Sun Belt standings and maybe even find their way to a bowl berth. Check back all season long for free college football picks and college football predictions at Sports Chat Place.

Let’s take a closer look at Louisiana-Monroe’s current status and break down their chances at hitting five victories this season.

The 2019 campaign was pretty “meh” all around for Louisiana-Monroe, however that was expected and the Warhawks finished right where they’d been initially projected in the standings prior to the season. LA-Monroe had some tough matchups right out of the gate, falling at Florida State, at Iowa State and to Memphis in just the first five games. The Warhawks didn’t get much respite after that due to a tough schedule, but did have some near-misses that hinted at their potential.

In any case, Louisiana-Monroe will bring back head coach Matt Viator and DC Mike Collins for the 2020 season. The coaching crew will have some holes to fill after the departure of QB Caleb Evans, the two top receivers and four starting offensive linemen. The good news is that Louisiana-Monroe still has plenty of weapons like RB Josh Johnson and receiver Perry Carter. On defense, the Warhawks also have a strong secondary led by CB Corey Slaughter.

The UL-Monroe schedule this year is a bit of a jaw-dropper; things are going to be rough at many points in the season. The Warhawks open up easily enough and have a very early open week, then in late September things start getting fierce with a road trip to Georgia. Louisiana-Monroe will have to play seven road games in a nine-game span, with difficult home matchups versus Appalachian State and Louisiana thrown in the mix as well.

Pick: I’m going under. Five wins isn’t an especially high bar, but given that Louisiana-Monroe is a team in the retooling stages this season (a stage the program has been in for a while), but the victories are going to be tough to come by. There’s a glut of close-quarters road games on the schedule, and with the Sun Belt projected to be pretty competitive once again this year I don’t see ULM emerging from the fray. I expect some encouraging progress, but not a lot of wins.