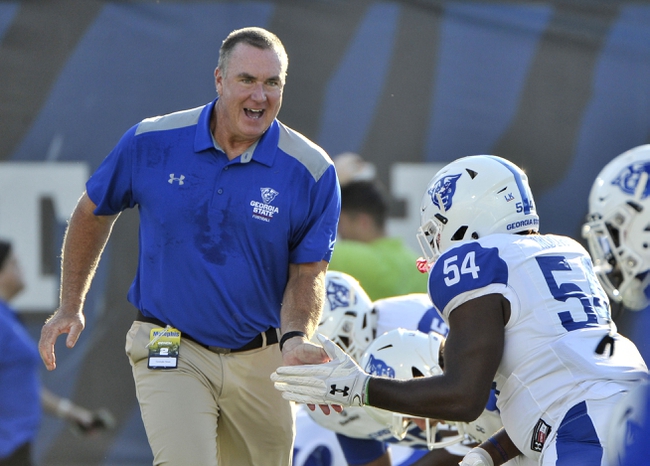 Georgia State had a pretty solid football season in 2019, but things didn’t end the way the team hoped. The Panthers went 7-6 overall and 4-4 in Sun Belt play, earning an invite to the Arizona Bowl where they lost 38-17 to Wyoming. This season, Georgia State will look to make a bigger impact on the conference standings and bag a bowl game win this time. Get Free College Football Picks and College Football Predictions for every game all season long at Sports Chat Place.

Let’s take a closer look at Georgia State’s current status and break down their chances at hitting six victories this season.

Things started out really well for Georgia State last season. Despite a couple of road losses, the team was 6-2 at the end of October and things were looking up. The Panthers could only manage one more win during the last four games of the regular season however, which put a damper on their bowl game level and conference aspirations. Still, for a team that was projected to finish last in the East Division, it was a pretty good campaign—not to mention the promising upset victory in the opener at Tennessee.

In any case, Georgia State will roll with head coach Shawn Elliott for his fifth season. He and the staff will have some retooling to do, as QB Dan Ellington and impact rusher Tra Barnett are now gone. The Panthers still boast a solid line on both sides however and do retain their top three receivers from last year in Cornelius McCoy, Sam Pinckney and Roger Carter. The big question is going to be at quarterback though; we could see a redshirt freshman there in 2020.

There are a couple of matchups prior to the Panthers’ open week that really stick out. The trip to Alabama in Week 2 is going to be killer, and the very next week Georgia State hosts Louisiana in what should be a difficult game as well. Later on in the season is an intimidating road trip to Appalachian State, then the Panthers will finish things off with a high-profile rivalry game at home versus Georgia Southern.

Pick: I like the over. I don’t think Georgia State is bound to hit much more than six wins this season, but if they play to their capabilities the Panthers can get to that half-dozen number. There are a few very talented teams on the schedule, but even if you pencil those in as losses there’s still enough meat left on the bone for Georgia State to become bowl-eligible. I don’t think the Panthers will make much noise in what should be a competitive East Division, but when the dust settles they should be No. 2 or 3 in the standings once again.