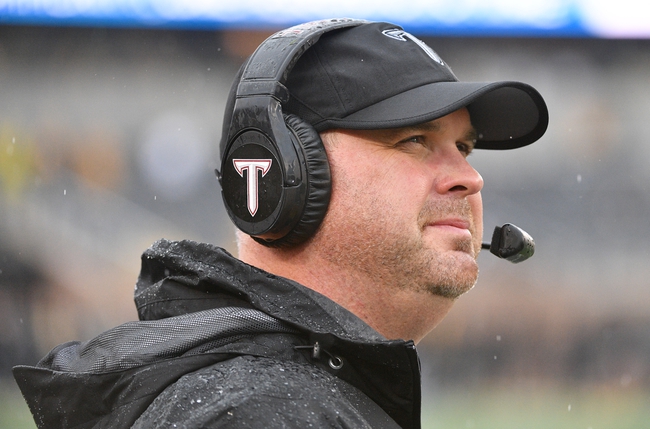 Troy posted a pretty disappointing football season in 2019. The Trojans finished out of bowl eligibility at 5-7 overall and 3-5 in Sun Belt play, leaving the team one spot out of the basement in the East Division. Troy is projected to improve this year however, and their goals will be to compete for the Sun Belt title and come away with a bowl game victory at season’s end. Get Free College Football Picks and College Football Predictions for every game all season long at Sports Chat Place.

Let’s take a closer look at Troy’s current status and break down their chances at hitting the eight-win mark in 2020.

The Trojans were pretty hit-and-miss throughout the 2019 campaign, winning consecutive games just once during the season. Troy had five wins and some slim bowl hopes left with two games remaining on the schedule, but unfortunately those games were against Louisiana and Appalachian State. Troy was summarily demolished in those matchups by a combined score of 101-16 despite scoring 112 combined points in their previous two outings versus Georgia Southern and Texas State. Long story short, the Trojans just couldn’t maintain form on either side of the ball.

This year, Troy retains head coach Chip Lindsey, OC Ryan Pugh and DC Brandon Hall, all in their second years in those roles. The good news is that the Trojans are projected to have a strong, young defense this season, with impact guys like DL Will Choloh, LB Carlton Martial and CB TJ Harris returning to the squad. The team also boasts a solid returning receiving corps, but will have some tinkering to do at QB (Kaleb Barker is gone) and with restocking the offensive line.

The first part of Troy’s schedule doesn’t look too bad; things start out with a couple of winnable games versus UAPB and UMass, then we’ll see what the Trojans are made of when they host NC State. After the open week things start getting interesting, and there’s a stretch of four road games in five appearances to close out the season—the last two being very difficult matchups at Tennessee and Appalachian State.

Pick: I have to go under here. Eight wins seems like a lot for a team that’s retooling some on offense. Looking at the schedule, the wins are there but some will have to come in the form of tough road matchups against teams that will do significant scoreboard damage. If Troy isn’t completely on point against teams like Georgia Southern and App State, the games will get away from them in a hurry. I like the Trojans to be bowl-eligible at six or seven wins this season, but not quite make it over the proverbial hump.