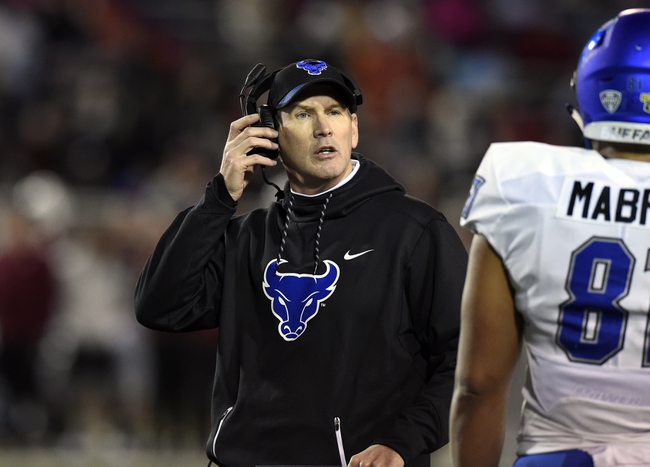 The Buffalo Bulls will look for continued success and a competitive run in the MAC during the 2020 college football season.

Buffalo had a promising football campaign in 2019. The Bulls went 8-5 overall and 5-3 in MAC play to finish third in the East Division. That effort earned Buffalo an invite to the Bahamas Bowl, where they took out Charlotte 31-9. In the 2020 season, Buffalo will be competing for the division title and attempting to work their way back to another bowl victory. Check back all season long for free college football picks and college football predictions at Sports Chat Place.

Let’s take a closer look at Buffalo’s current status and break down their chances at hitting eight wins this season.

2019 was a nice bounce-back year for Buffalo after they fell to Troy in the 2018 Dollar General Bowl, and the team pretty well met expectations with a third-place finish in the East Division behind Miami and Ohio. The Bulls’ year began pretty rough with a 2-4 start, but the team only lost one of their final six regular-season games, putting up some pretty impressive offensive performances to close out the year.

Lance Leipold returns to the Buffalo sideline for his sixth year in 2020, bringing along coordinators Andy Kotelnicki and Jim Zebrowski (offense) and Brian Borland and Chris Simpson (defense). That crew will have some stylistic choices to make on offense, as the team ran the ball the vast majority of the time last year and now has some more options in the passing game. We should still see plenty of ground-and-pound with the likes of Jaret Patterson (1,799 yards last year), as well as an expanded aerial attack with QB Kyle Vantrease and receiver Antonio Nunn. It should make for a capable and diverse offense if everything comes together.

Looking at the schedule, there are a lot of ways Buffalo’s 2020 season could play out; some great, some not-so-great. Road games at Kansas State, Ohio State and Bowling Green all come in the first four outings, so it would be an accomplishment for the Bulls to escape that gauntlet with even two victories. Things settle down after that, but there are still potential pitfalls in the likes of Kent State, Army and Ohio.

Pick: I’m going over here, but just barely. Provided Buffalo can escape that opening quartet of rough matchups there are some winnable games as the schedule continues, and a pretty well-slotted open week between road games at Army and NIU. I expect it will take a month or so for Buffalo to find their traction and gain some rhythm on a game-to-game basis, but the roster is talented enough to get there. I think Buffalo can win eight games in 2020.