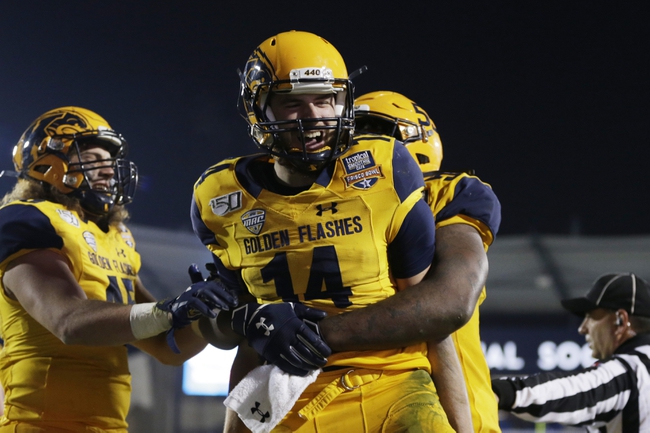 Kent State had a very satisfying college football campaign in 2019. The Flashes fought to earn a bowl berth late in the season, getting their chance at the Frisco Bowl against Utah State. Kent State triumphed there 51-41 for the team’s first-ever bowl victory and a solid 7-6 overall record. This season, the Flashes will attempt to make some more noise in the MAC and earn another bowl victory. Get Free College Football Picks and College Football Predictions for every game all season long at Sports Chat Place.

Let’s take a closer look at Kent State’s current status and break down their chances at hitting six wins this season.

Kent State’s 2019 campaign was a rollercoaster. The Golden Flashes started out 3-3, then lost three straight games to put their bowl aspirations in serious jeopardy. To their credit, Kent State rallied for tight victories in their final three regular-season games against Buffalo, Ball State and at Eastern Michigan to hit that crucial six-win mark and ultimately add the first bowl win for the school. It was one of the best turnarounds in recent college football memory.

Head coach Sean Lewis returns to the Kent State sideline for his third season, flanked by OC Andrew Sowder and DC Tom Kaufman, also in their third years. The good news is that crew will get the electric receiving duo of Dustin Crum and Isaiah McKoy back. Xavier Williams and Joachim Bangda will also likely have sizable roles as backs behind a pretty strong offensive line. The defense has some notable turnover, but still retains enough talent in 2020 to be effective. And the Flashes will need every bit of that with their tough schedule.

Speaking of the schedule, it starts out pretty rough. Five of the first seven games are away from home with difficult matchups like Penn State, Kentucky and Alabama in the mix. Getting out of the gauntlet in the first five weeks with two wins would be considered a nice accomplishment for Kent State. Later on down the line are some intimidating games against MAC teams like Ohio and Buffalo. Nothing is going to come easily for the Golden Flashes this year.

Pick: I hate to do it, but I’m going under. Kent State’s 2019 campaign was the stuff of sports movies, and as much of a feel-good story as it is, it’s still going to be a difficult run to replicate. If everything goes well there are six (or maybe even seven) wins on the schedule here, but with big dogs like Penn State and Alabama lurking on the early schedule, it’ll be hard to establish any sort of rhythm until later in the year. Kent State could still potentially go on a late-season run and eke into a bowl berth, but I think they’ll fall just shy.