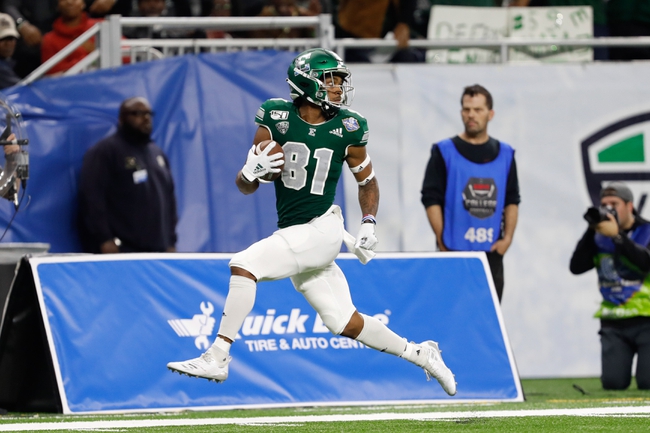 The Eastern Michigan Eagles have some work to do in the 2020 college football season after an up-and-down year last fall.

Eastern Michigan posted a decent football campaign overall in 2019, but things ended in disappointment. The Eagles were 6-7 overall with a 3-5 MAC record, earning a trip to the Quick Lane Bowl where they lost to Pittsburgh 34-30. This season, Eastern Michigan will try to gain some footing in the conference standings and maybe even qualify for another bowl game if all goes well. Check back all season long for free college football picks and college football predictions at Sports Chat Place.

Let’s take a closer look at Eastern Michigan’s current status and break down their chances at hitting five wins this season.

Easter Michigan was projected to make fourth place in the West Division last year, but ended up finishing in the basement of a tough division. Things started out well enough for the Eagles, with a 3-1 record and a nice road win over Illinois, but the team struggled once they got to MAC play, falling in five of their final eight regular-season games. Eastern Michigan had a few close calls mixed in there and could have gotten a few more wins had they been able to close better.

As we move on to 2020, head coach Chris Creighton returns to the Eastern Michigan sideline in his seventh year, along with OC Aaron Keen (fourth year) and DC Neal Neathery (fifth year). That crew will have its work cut out this season, as QB Mike Glass (who was tossed for throwing punches late in the bowl game) is gone and the RB corps is a question mark right now. We’re probably looking at Preston Hutchinson or Chris Helbig to take over the quarterback job, and whoever wins the spot will have a nice crop of receivers to work with, including Quian Williams and Dylan Drummond. That’s encouraging, since the offense may have to cover for some defensive lapses again this year.

If you’re wondering why Eastern Michigan’s win total is so low—and look beyond the roster—the team gets a pretty daunting schedule in 2020. The Eagles start out at Kentucky, then have trips to Missouri, Ohio, Army and Western Michigan (not to mention a home tilt against Toledo) prior to the bye. After that come a few more potentially dangerous teams in Ball State, Bowling Green and Miami-OH. Nothing Eastern Michigan gets this year will come easy.

Pick: I’m staying under. The bar is set pretty low here so I’d like to go over, but looking at the schedule I can’t find that many wins. The West Division—and the MAC as a whole—should be very competitive this year as it’s stuffed with some pretty good teams. It’s going to be a dogfight to get to the top of the standings in 2020 and I don’t think there’s enough room for Eastern Michigan in that mix, thanks mainly to that rough schedule.