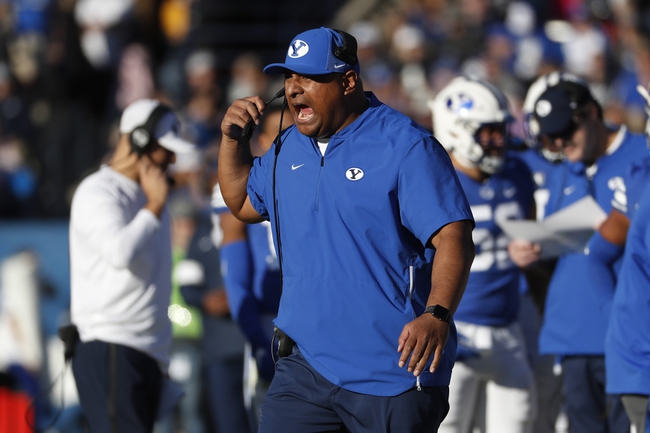 BYU’s 2019 season was pretty solid overall, but ended on a sour note in the final game. The Cougars finished 7-6 on the year and earned an invitation to the Hawaii Bowl, where they lost to the Rainbow Warriors 38-34. In 2020, BYU will attempt to improve on last year’s record, get back to a bowl game and come away with a win this time. Get Free College Football Picks and College Football Predictions for every game all season long at Sports Chat Place.

Let’s take a closer look at BYU’s current status and break down their chances at hitting eight wins this year.

BYU had a couple of solid victories early last year, beating Tennessee on the road (29-26; 2OT) and USC at home (30-27; OT) within the first three games. The Cougars went on a three-game losing skid after that, falling at Toledo and at South Florida by a combined 11 points. A five game-win streak followed before BYU closed out with losses at San Diego State 13-3 and to Hawaii in the bowl game 38-34. Lots of great things happened in 2019, but there’s plenty of room for improvement as well.

Head coach Kalani Sitake will take the sideline for BYU again this year along with DC Ilaisa Tuiaki, both in their fifth seasons, and OC Jeff Grimes returns for his third. That crew has some roster decisions to make; one key move will be QB Zach Wilson, who missed several games with a thumb injury last year. He’s probably still got the starting spot locked up but will have some noteworthy competition in 2020. Outside of that, the good news on offense is that BYU retains their top two running backs along with their lead receiver from 2019 in senior TE Matt Bushman.

It’s looking like BYU will field a solid team this year, but their schedule is pretty daunting. The Cougars open up at Utah, who they haven’t beaten since 2009, then have Michigan State before trips to Arizona State and Minnesota. That’s a pretty rough opening four games. There are some other potential slip-ups in Utah State, Missouri State and Boise State later on in the schedule, as well as a few matchups the Cougars should dominate on paper.

Pick: Going under. Though I think this BYU team will be strong, they’ve got a tricky front end of the schedule and if they’re not careful they could drop their chances at bowl eligibility way too soon. Looking at the beatable teams compared to the not-so-tough-looking teams on the slate, churning out eight wins is going to be quite a task, and BYU will need to avoid injuries or flat play in order to do it. I still think the Cougars make a bowl this season, I just don’t think they’ll improve last year’s record.