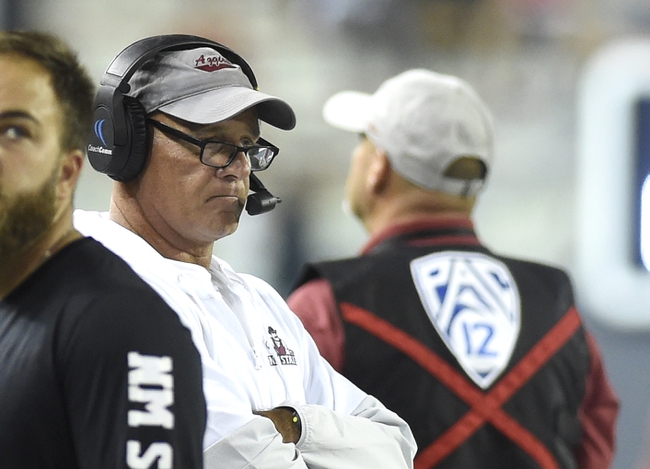 The New Mexico State Aggies should have a stronger college football season in 2020 after their ugly finish last year.

New Mexico State posted a pretty meager football campaign in 2019. The Aggies would finish 2-10 overall on the season and out of bowl eligibility once again. Though a bowl berth probably isn’t in the cards for New Mexico State in 2020, the team will focus on showing improvement over last season and developing some young players for the years to come. Check back all season long for free college football picks and college football predictions at Sports Chat Place.

Let’s take a closer look at New Mexico State’s current status and break down their chances at hitting four wins this season.

Not a whole lot went right for New Mexico State last year, and they were in trouble right out of the gate. The Aggies were blown out by Washington State and Alabama in their first two outings, then lost by 21 to San Diego State before finally turning in a competitive performance at New Mexico in a 55-52 loss. That was all part of a nine-game losing streak to open the Aggies’ 2019 season which basically torpedoed their bowl chances by around Week 7. New Mexico State was within a score during just two of those defeats; otherwise they were getting drilled on the scoreboard with regularity.

So that brings us to 2020, with head coach Doug Martin at the helm in his eighth season. He’s joined once again by DC Frank Spaziani (fifth year) and associate head coach Oliver Soukup (fourth year). That crew will look to find success wherever they can get it, perhaps building on the running game New Mexico State developed late last year. The Aggies went 2-1 in their final three weeks, rushing for an average of 36 times and 246 yards per game. The bad news is that 1,000-yard rusher Jason Huntley has moved on after finishing his career at No. 7 on the school’s all-time rush list with 2,182 yards.

If there’s some good news for New Mexico State in 2020, it’s that their schedule is comparatively easier. There’s an enticing four-game stretch where the Aggies play opponents that went a combined 6-42 in 2019—and three of those four games are at home for New Mexico State. With some luck, New Mexico State could bag their over number for the season right there.

Pick: I’m going over. Not that I’m especially high on New Mexico State this year—I’m not—but the team does have 4-6 winnable games on paper heading into this season. Provided the Aggies can flesh out their receiving corps with young guys (they lost a quartet of high-volume pass-catchers) and reestablish that running game from late last year there should be a few wins on the schedule. This won’t be the breakout year for New Mexico State, but we should start seeing some flashes in 2020.