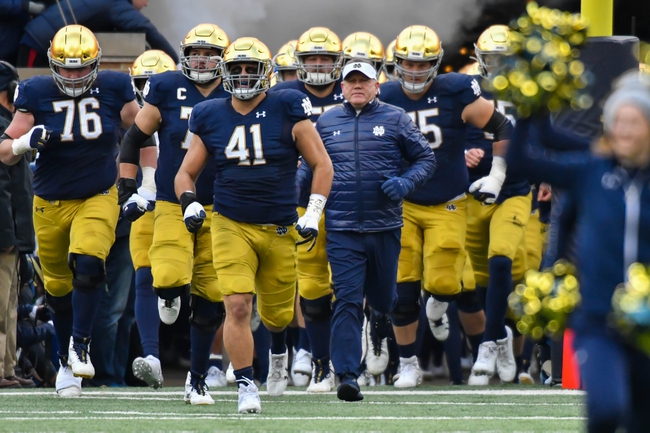 The Notre Dame Fighting Irish are positioned to hit double-digit victories again in the 2020 college football season if all goes according to plan.

Notre Dame is coming out of a solid football campaign in 2019. The Fighting Irish finished 11-2 overall and No. 12 in the AP poll, earning an invite to the Camping World Bowl where they took out Iowa State 33-9. Notre Dame is projected for another big season in 2020, and the Irish will be "fighting" it out with some of the top teams in the country. Check back all season long for free college football picks and college football predictions at Sports Chat Place.

Let’s take a closer look at Notre Dame’s current status and break down their chances at hitting the double-digit win mark this season.

The 2019 Notre Dame team didn’t quite reach the lofty heights of the previous season (12-1 and a Cotton Bowl Classic appearance), but it ended up being a nice campaign all the same. The Irish weren’t much of a match for Michigan in their October 26 matchup (a 45-14 loss) but did hang around with Georgia in the third game, an eventual 23-17 loss. Outside of that, Notre Dame took out some very talented teams like Virginia, Navy and USC. That latter pair are on the schedule again this season, so those will be interesting matchups.

In any case, this year marks Irish head coach Brian Kelly’s 11th season, and he’ll bring along DC Clark Lea in his third year. Offensive coordinator Tommy Rees joins Notre Dame in his first season in that capacity as well. That crew has some significant elite-level turnover, as six 2019 players were drafted into the NFL and six more eventually signed with pro teams. Notre Dame has 33 wins over the last three seasons however and they’ve built a strong program, so there’s talent here. The major tasks will involve replenishing the skill players, as Chase Claypool, Chris Finke and Cole Kmet are all gone, and there’s really no breakout lead back right now. Quarterback Ian Book seems to be the only impact fixture at the moment.

The good news about Notre Dame’s schedule this year is that it’s pretty gradual as far as difficulty. Provided the Irish can get through their opening trip to their namesake country, the rest of September isn’t too intimidating. Notre Dame should have some good rhythm going by the time they see the likes of Wisconsin and Pittsburgh. The door is open in a best-case-scenario for an undefeated season, but the Irish will have to dispose of Clemson and USC in the final four weeks. Needless to say, much easier said than done.

Pick: I like the over. Granted, it’s a lofty goal for Notre Dame to hit much more than 9 or 10 wins this season, and the roster being in a state of transition in some important spots certainly doesn’t help. That said, the Irish’s schedule in 2020 only features a handful of potentially intimidating opponents, and with an established program like ND the team should come together to take care of business. The Irish should be in the national title conversation until at least the Clemson game--which should be a pretty epic matchup. Mark your calendars.