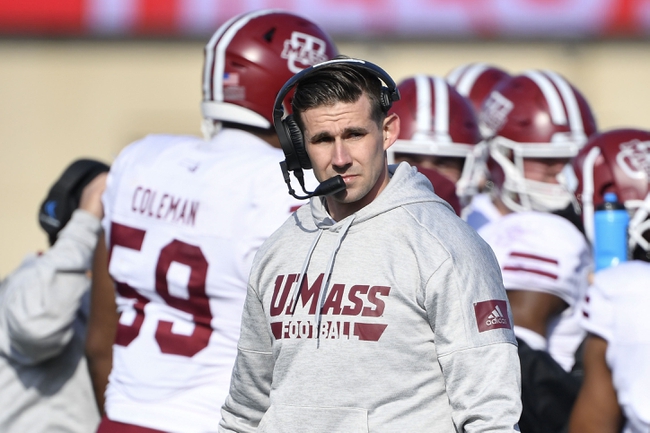 The UMass Minutemen have an uphill battle in the 2020 college football season following a disappointing campaign last year.

UMass had a rough football season in 2019. The Minutemen went a paltry 1-11 overall, ranking near the basement of FBS teams. It’s been a long time since UMass was relevant in college football, but this year the program will attempt to take a few steps toward that goal. Check back all season long for free college football picks and college football predictions at Sports Chat Place.

Let’s take a closer look at UMass’ current status and break down their chances at hitting three wins this season.

Want to know how bad things were last season for the Minutemen? Well, their only victory came against Akron on September 28. Akron was ranked last by CBS Sports out of all FBS teams last year. UMass was second-to-last. The Minutemen weren’t close in any of their losses, and they allowed points like a proverbial sieve. It’s been like this for a few seasons, and UMass really needs to show some progress soon.

Head coach Walt Bell is back on the sideline for the Minutemen in his second season. Bell has been optimistic about the incoming class addressing the team’s needs, and if all goes well he’ll be able to build the program over the next few years. The recruiting focus has been on the lines, tight ends and linebackers, and if Bell can solidify that core the Minutemen should improve on both sides of the ball. Look for the tight end spot to be a key position; if Taylor Edwards can stay healthy he could put up some big numbers in this scheme. It's looking like UMass is gearing up for a smash mouth, clock-control style of play; that'll certainly help on the scoreboard if they can pull it off.

Looking at the schedule, if UMass can hit the ground running there are some wins to be had. The Minutemen start out with a trip for UConn, then have Troy and Albany waiting. The road games at App State and New Mexico will be challenging in that early stretch as well. Later on in the slate are some rough-looking matchups versus Auburn and Army, then it’s a road trip to Liberty to close off the season.

Pick: I like the over. Sure, UMass was miserable last season. Sure, they’ve got a lot of work to do. That said, on paper the schedule isn’t very daunting (outside of a few notable spots), and with a second-year head coach things should go a little more smoothly for the Minutemen in 2020. I’m not saying UMass is bowl-bound or anything, but 3-5 wins is certainly a realistic goal for this team.