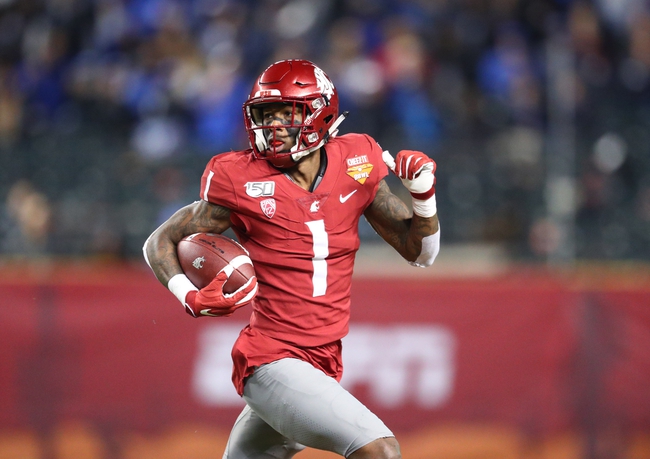 The Washington State Cougars have a good shot at making a bowl game in the 2020 college football season if all goes according to plan.

Washington State went through a pretty mediocre football season in 2019. The Cougars finished 6-7 overall and 3-6 in the Pac-12, one spot out of the basement in the North. In the Cheez-It Bowl, Washington State’s season ended on a sour note with a 31-21 loss to Air Force. In 2020, the Cougars will try to improve on last season’s mark, make some noise in the conference and come home with a bowl game win. Check back all season long for free college football picks and college football predictions at Sports Chat Place.

Let’s take a closer look at Washington State’s current status and break down their chances at hitting seven wins this season.

After the glorious heights of the 2018 season (a school-record 11 wins), Washington State’s performance last year was sub-par. The Cougars started out well enough with three straight wins, but then promptly lost three straight afterward. Granted, those were against UCLA, Utah and Arizona State—all solid teams—and Washington State was competitive in two of them. Still, it’s something of an achievement that the Cougars were able to clinch a bowl spot; two key wins versus Stanford and Oregon State late in the season were the deciding factor.

Looking ahead to 2020, Washington State hits the reset button on their coaching staff. Nick Rolovich will take over the head coach role, and he’ll be joined by Brian Smith and Craig Stutzmann on offensive coordinator duties and Jake Dickert as DC, all in their first years as well. We’re probably going to see quite a culture change here, as well as a different scheme on the field. While Washington State put up some great numbers in the passing game last season, they were a one-dimensional offense that averaged just 68.1 rush yards per game. We should expect to see the Cougars try to balance that out better this year. The team has a lot of turnover on offense however, so it’ll be a challenge.

In any case, on to the schedule itself. After an initial glance, it’s not terribly difficult and if Washington State can get off to a good rhythm early they could do some real damage in the win column. There are some intimidating matchups here and there—especially within Big 12 play with the likes of Utah and Oregon. If Washington State can bang out 4-5 wins prior to their open week, they’ll be in great position to snag bowl eligibility.

Pick: I’m going with the over. I’m not totally sold on this Washington State team, and I don’t think I will be until we can see a product on the field. That said, the path to seven wins is there, and provided the new coaching staff can install a competent scheme with some coachable players, the Cougars should be able to make bowl eligibility in Rolovich’s first year.