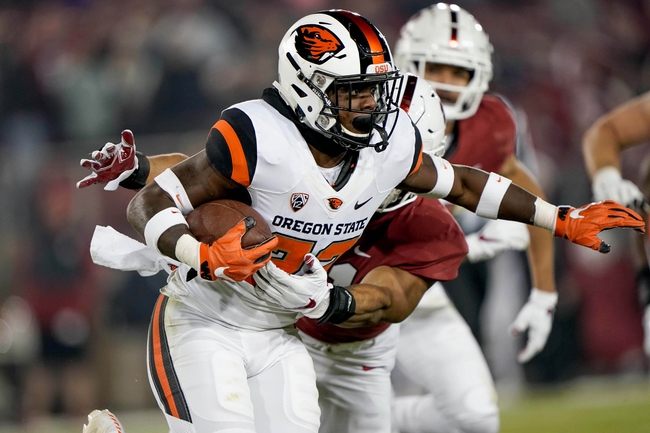 The Oregon State Beavers will be pushing hard for bowl eligibility during the 2020 college football season.

Oregon State had a fairly mediocre football campaign in 2019, finishing at 5-7 overall and 4-5 in the Pac-12. That left the Beavers in fourth place in the North Division and just out of bowl game eligibility. Oregon State is expected to contend for a bowl slot in 2020, and if all goes well they’ll be able to improve their standing in the conference also. Check back all season long for free college football picks and college football predictions at Sports Chat Place.

Let’s take a closer look at Oregon State’s current status and break down their chances at becoming bowl-eligible this season.

If you’re an optimist, 2019 was a solid campaign for the Beavers, comparatively speaking. Oregon State was projected to finish firmly in last place in the North Division, but the team tied for the second-best record there and outperformed Washington State and Stanford. The Beavers could only string together consecutive wins once during the season (both road games), but they also had a few near-misses—like 31-28 at Hawaii, 31-28 versus Stanford or 54-53 at Washington State—that would have put Oregon State over the bowl-game hump.

This year marks the third for the main coaching crew at Oregon State: head coach Jonathan Smith, OC Brian Lindgren and DC Tim Tibesar. They’ll have some decisions to make regarding roster turnover, but the core of the Beavers team seems to be pretty talented. With QB Jake Luton gone, Tristan Gebbia and Chase Nolan will likely battle it out for the starting spot. Oregon State’s top receiver from last year Isaiah Hodgins (1,171 yards, 13 TDs, 86 catches) has moved on, and his output will be difficult to replicate. The Beavers will also lean on RB Jermar Jefferson, who showed some major promise last season before getting hit by the injury bug.

There are certainly six wins on the schedule for Oregon State, but they’ll have to be on point for most of the season to get there. The Beavers start out with a tough trip to OK State, then get three (winnable) home games to finish out September. The real fun begins with road games at Arizona State and Washington, and November is a Pac-12 gauntlet with UCLA, Utah, Arizona and Oregon waiting to finish off the slate.

Pick: I’m going to take the over, but just barely. Provided Oregon State can slot in a few new faces to cover some of the gap left by their departed impact players, the team should play well enough to become bowl-eligible this season. Granted, they’re probably going to have to get it wrapped up by the Oregon game, as that would be a tall order to have a bowl game riding on. I think the wins are there however; 6-7 victories seems about right for the 2020 Beavers.