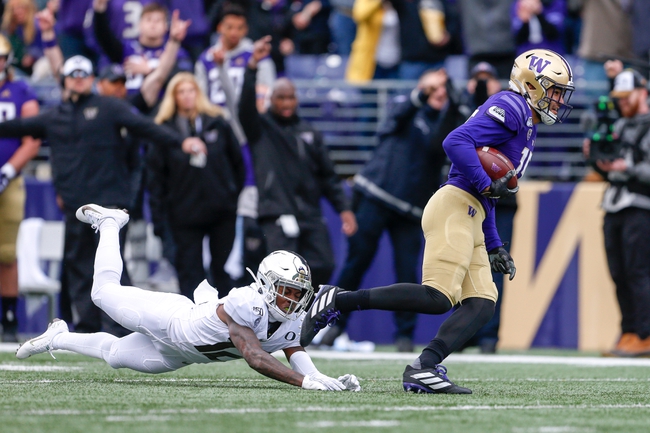 The Washington Huskies will look to gain some ground in the Pac-12 during the 2020 college football season.

Washington put up a solid football campaign in 2019. The Huskies went 8-5 overall in a competitive Pac-12, going 4-5 in the conference and earning a trip to the Las Vegas Bowl, where Washington took out Boise State 38-7. In 2020, the Huskies’ goal will be to do some more damage in the Pac-12 standings and take home another bowl game victory. Check back all season long for free college football picks and college football predictions at Sports Chat Place.

Let’s take a closer look at Washington’s current status and break down their chances at hitting nine wins this season.

Considering the competition level the Huskies had to put up with in the conference in 2019, an 8-5 campaign was pretty darn good. That said, Washington was projected to compete with Oregon for the North Division championship, and ended up finishing in a relatively distant tie for second. The good news is that the Huskies were in pretty much all of their games, and just one defeat (23-13 at Stanford) was decided by more than a score. Regardless of how many of those losses could have been turned into last-second wins, Washington wouldn’t have been able to catch the red-hot Oregon team anyway, so the bowl game win should be considered a nice bow on a good season.

This year marks a coaching change at Washington. Head coach Jimmy Lake comes in with first-year OC John Donovan and first-year co-defensive coordinator Ikaika Maloe. The major issue that crew will have to deal with is installing a new quarterback, and to put it mildly there isn’t a whole lot of QB experience on the roster. Jacob Sirmon is probably the favorite to start there in 2020, but he has very little time on the field in college so far. Inside linebacker is also going to be a hot debate for Washington; it was a weak area last season, and Kyler Manu and Brandon Wellington have both graduated. Look for some new, and very important, faces there.

Washington starts off with a tough matchup against Michigan in a trial by fire for the new coaching staff. Things ease up a bit prior to the open week, when the Huskies prep for a huge road game at Oregon. A little further down are stout conference teams like Utah, Call and USC, then a road game at Washington State for the Apple Cup to finish out the regular season.

Pick: I’m going under, but not by much. There’s a good mix of challenging games and relatively simple matchups on the Washington slate this season, so it’s a nice opportunity to find out what the new staff/players are made of. If the Huskies don’t have four wins by the time the Utah game rolls around, it’s going to be difficult to eke out those extra few victories that will propel the team in the standings. Six wins, seven wins, eight wins, this Washington team is more than capable of hitting. Anything much beyond that I have a tough time believing, especially in a tough division like the North.