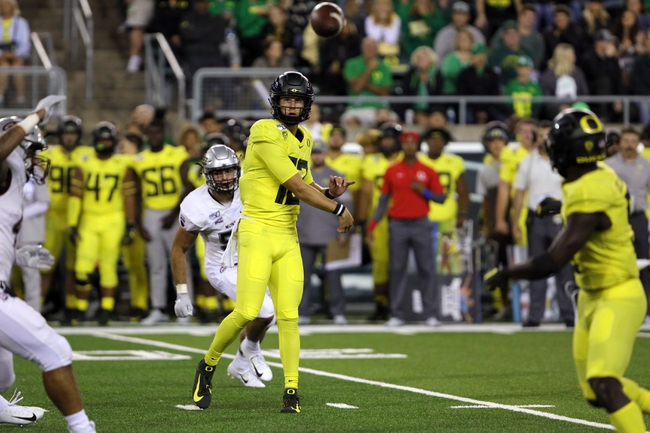 The Oregon Ducks are projected to hit double-digit wins once again during the 2020 college football campaign.

Oregon is coming out of a great football season in 2019. The Ducks went a smooth 12-2 overall and 8-1 in Pac-12 play, winning the North Division, the conference championship and the Rose Bowl 28-27 over Wisconsin. Oregon is projected to contend for the Pac-12 title once again in 2020, and if all goes well the sky is the limit for this team. Check back all season long for free college football picks and college football predictions at Sports Chat Place.

Let’s take a closer look at Oregon’s current status and break down their chances at hitting double-digit wins this season.

All things considered, there’s not a whole lot to complain about when it comes to Oregon’s 2019 season. The Ducks started out a little wobbly with an opener loss to Auburn but quickly regained form, with a 31-28 loss to Arizona State on November 23 being their only other blemish. Oregon had a few tight escapes, like 37-35 versus Washington State or 35-31 at Washington, but otherwise the team was one of the best in the country. That one conference loss does stick out, but it’s moot at this point.

2020 marks the third season for Oregon head coach Mario Cristobal, who brings in Andy Avalos at DC in his second season and Joe Moorhead at OC in his first. The major item on the staff’s plate is replacing departed QB Justin Herbert; the Ducks have some options there, but it’s probably going to be former backup Tyler Shough in that role. Oregon also has some work to do with rebuilding the offensive line and plugging a few other holes, but the good news is that they’ve got the top recruiting class in the Pac-12 and shouldn’t be short on talent.

A glance at the Oregon schedule this year shows a couple of dangerous teams front-loaded on the schedule. The Ducks open up with North Dakota State, then have to deal with Ohio State the very next week. After that things ease up a bit, but there are still some potentially tricky Pac-12 teams on the slate like USC, Washington and California. Any one of those squads could throw a wrench into Oregon’s plans.

Pick: I’m going over. There are 10 wins here, even if the Ducks falter in the early-going against North Dakota State and Ohio State. The Pac-12 should have a handful of pretty solid teams once again this season, but Oregon is projected to emerge from the top of that heap. Provided the Ducks play to their potential and hold themselves to one loss or so, they should be in the national championship conversation as the season winds down.