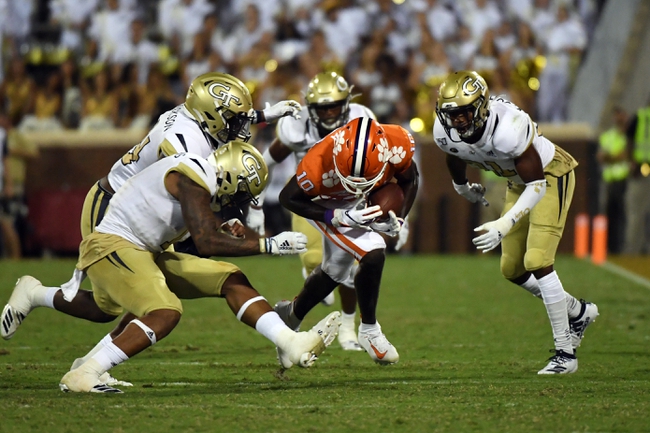 This will be the first game of the 2020 season for both teams, and Georgia Tech couldn’t open with a much more difficult opponent. The Yellow Jackets are coming off a 3-9 season in 2019, and hosting a Clemson team that plowed through the ACC at 8-0 last season is certainly a tall order for the first game. Get Free College Football Picks and College Football Predictions for every team all season long at Sports Chat Place.

The ACC was pretty darn good overall last season, but Georgia Tech was one of the teams that didn’t do so well. The Jackets managed to go just 2-6 in the conference, a disappointing result considering they went to a bowl game in 2018. That’s mostly because of a new offensive system that was installed last year, taking Georgia Tech from an option to a spread team. There should be fewer of those growing pains this season, so look for the Yellow Jackets to do some more damage on the scoreboard. Sophomore QB James Graham should get the opportunity to step back into the starting role and prove himself, and he'll have a fairly deep and experienced offense around him.

As for Clemson, there’s not a whole lot that needs to be said. They’re one of the top teams in the country, and pretty stacked after last season’s squad made the National Championship Game. That Tigers team blew out Georgia Tech in the opening week 52-14, and although they had a couple of scares along the way versus North Carolina and Ohio State, the loss in the final game is the only blemish. That defeat will weigh heavy on the minds of this year’s Clemson team, as a lot of impact players are returning for another run at a title. This will also be a key season for Tigers QB Trevor Lawrence, who was shaky in both the beginning of the year and the postseason. If Lawrence can take that next step and perform in the big games, he'll make Clemson difficult for anyone to stop.

Pick: Going Clemson. Predicting season openers is always pretty tricky, and after this crazy offseason it’s even more so. Still, let’s consider the situation here. Georgia Tech is a developing team still getting acclimated to a new system, and though they’re expected to be improved over last season most people don’t think the Jackets will take a significant leap in 2020. Clemson is coming off a national title game berth, and retaining most of their weapons. Those players will have a bad taste in their mouths coming off that loss, and they’ll take it out on Georgia Tech. Considering how the Tigers flattened the Jackets in the opening week last season (though that was at Clemson), I don’t think 26 points is all that thick.