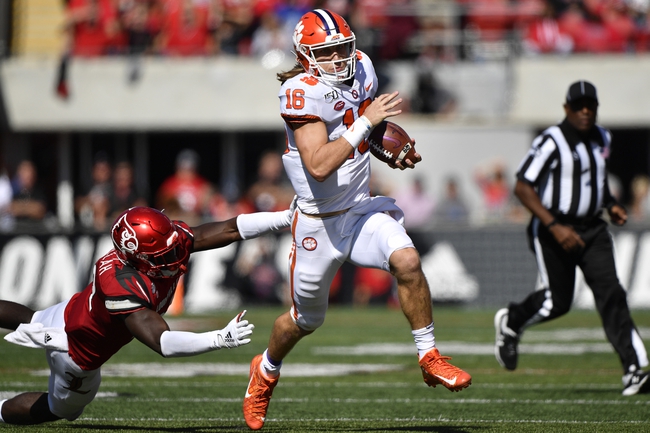 This will be an interesting ACC matchup, as Clemson and Louisville finished Nos. 1 and 2 in the Atlantic Division last year. Louisville is coming off an 8-5 season and a Music City Bowl win over Mississippi State, and they’re one of the few teams in the conference who can realistically hold a candle to the Clemson juggernaut right now. The Tigers are simply on another level; in 2019 they blew through the schedule at 14-1, winning the ACC Championship Game, the CFP Semifinal and ultimately falling to No. 1-ranked LSU in the CFP National Championship as their only blemish. Get Free College Football Picks and College Football Predictions for every game all season long at Sports Chat Place.

Even though the line here is pretty thick, oddly enough it’s the slimmest spread Clemson has been favored by in an ACC game since November of 2018. That’s because Louisville is a pretty solid team themselves, and should have a good season despite having no realistic chance at winning the division. Head coach Scott Satterfield and his main crew go into their second seasons at the helm, and they’ve got a pretty good roster to work with. After a tepid 2018 at 239 points, the offense got going last season with 430 points scored. That number came mostly from a really great running game, as the pass protection was pretty spotty in Louisville.

As for Clemson, their offense was cooking for most of the season. QB Trevor Lawrence started out shaky with eight interceptions in the first seven games but then picked up his game as the season wore on. Look for Lawrence to take another step forward this year and turn in some better playoff performances if all goes well for the Tigers. There’s some turnover on the offensive line, and some skill position holes to plug (like the departed Tee Higgins), but by all indications Clemson should be a nearly unstoppable national powerhouse once again in 2020.

Pick: It’s difficult predicting anything due to the unprecedented offseason, but thanks to the relatively thin line (and it feels strange calling a 23.5-point spread “thin”) this seems like a pretty good spot to take Clemson before the numbers really get out of hand. Sure, Louisville is going to put up some good numbers this year and they’ll almost certainly make a bowl game, but the talent gap between Clemson and the rest of the ACC is pretty stout. Given that the Tigers have a lot of key guys returning from last year’s team—not to mention the extra incentive from the title game loss—I think they’ll come out of the gate strong. I’m normally averse to point spreads over 10 or 15, but in this case I think it’s valid. I’m going with Clemson.