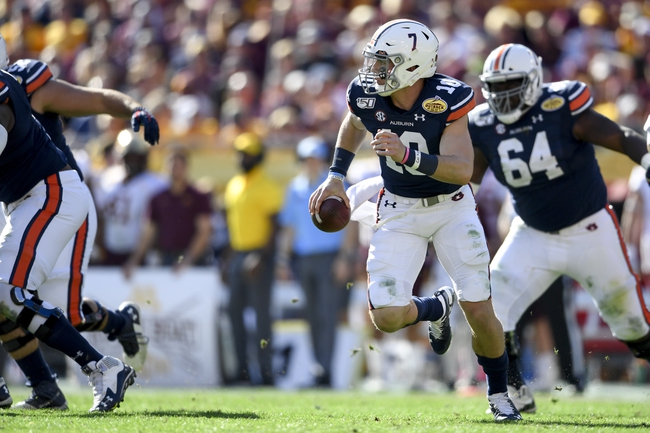 The Line: Auburn Tigers -6 Click to Get Latest Betting Odds

North Carolina is coming out of a 7-6 campaign overall in 2019. The Tar Heels earned an invitation to the Military Bowl, where they beat Temple 55-13. As for Auburn, they went 9-4 last year, but their season ended on a sour note when they fell in the Outback Bowl to Minnesota 31-24. Get Free College Football Picks and College Football Predictions for every game all season long at Sports Chat Place.

Let’s take a closer look at both teams and see if we can figure out how things may play out when the Tar Heels and the Tigers meet on September 12.

North Carolina did pretty well in a competitive ACC last season, going 4-4 in conference play—that’s pretty good considering only four teams finished with better records. What’s more, North Carolina was in every one of their losses; seven points was their highest margin of defeat. Had things gone differently in a few spots, the Tar Heels could have made the ACC Championship Game, as crazy as that sounds. Mack Brown’s presence in his second stint with the team was an immediate lift for the Tar Heels last year, and the team is expected to take an other step forward in 2020. Some outlets have North Carolina ranked in the top five of the ACC and the top 30 nationally, so this will be a telling season. The Heels do have a few heavy hitters on the upcoming schedule, with Auburn being one of those.

Speaking of Auburn, nine wins is a great season in most places, but some Tigers faithful were a little disappointed with the 2019 result. That said, considering Auburn had to deal with a really tough schedule and break in a true freshman QB at the same time, things went just fine. Bo Nix should take another step forward in 2020, and he’s got a great crop of receivers to work with—namely Seth Williams, Eli Stove and Anthony Schwartz. We should see a potent aerial attack from the Tigers this season, and it’s likely to begin spreading its proverbial wings in this very game.

Pick: This is a tough one, but I’m going with Auburn. This should be one of the more interesting matchups of the young college football season and I imagine it’ll be fairly close the whole way. North Carolina is getting a rough opening matchup versus UCF at Spectrum Stadium to begin the season, so they may be a little exhausted coming into Week 2. Auburn starts out more manageably against Alcorn State, and it’s tough to see too many issues there. I feel like the Tigers are the better play at this juncture.