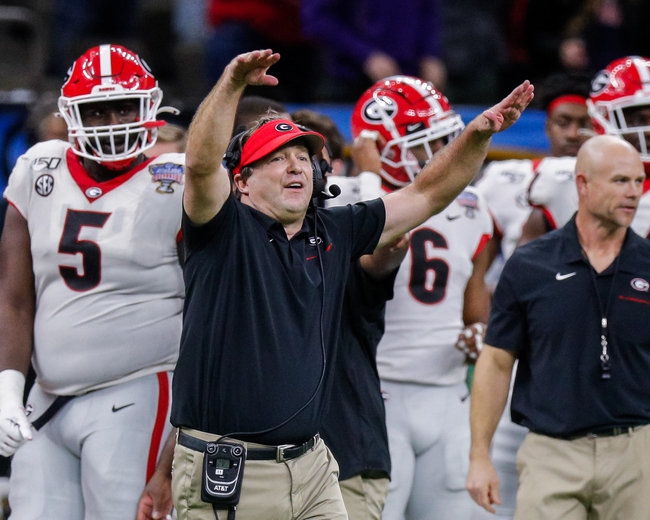 The Line: Georgia Bulldogs -18 Click to Get Latest Betting Odds

Virginia finished 9-5 overall last season, going 6-2 in ACC play for a Coastal Division championship. The Cavaliers dropped their final two games however, falling to Clemson in the ACC Championship Game and Florida in the Orange Bowl. As for Georgia, they had a great season in 2019, going 12-2 overall and winning the East Division of the SEC with a 7-1 conference record. The Bulldogs lost to LSU in the SEC Championship game but beat Baylor in the Sugar Bowl to end on a positive note. Get Free College Football Picks and College Football Predictions for every game all season long at Sports Chat Place.

Let’s take a closer look at both teams and see if we can figure out how things may play out when the Cavaliers meet the Bulldogs on September 7.

Virginia was projected to win the Coastal Division in 2019, and though they had to eke by Virginia Tech to do it, the Cavaliers were able to finish first. There’s obviously no shame in losing to the Clemson juggernaut, but Virginia probably could have played a little better against Florida in the Orange Bowl. In any case, Bronco Mendenhall is back at head coach for the Cavs in his fifth season. He and his crew should field another pretty good defense in 2020, but there will be some holes to fill on the offensive side of the ball—most notably QB Bryce Perkins.

Over on the Georgia side, there’s not a lot to complain about when it comes to 2019, unless you count the 2OT loss to South Carolina. That was the Bulldogs’ only blemish outside of the SEC Championship Game blowout versus LSU. Moving on to the 2020 opener, fifth-year head coach Kirby Smart and first-year OC Todd Monken will have their hands full getting the offense going against Virginia’s stout defense. That said, the Bulldogs do return strong this year and are expected to finish near the top of the conference. Georgia will look different this season now that last year's QB Jake Fromm has moved on to NFL play, but the school has a strong recruiting class and should regain form rather quickly. The Bulldogs have a few landmines (like Alabama and Florida) on the schedule, but should certainly be in the mix for the division title again.

Pick: I like Georgia. The line here seems about right; I’m thinking the Bulldogs will have a little trouble with Virginia’s defense initially, but should be able to wear them down as the game progresses. On the other side, the Cavaliers offense will likely take a few games before we see its potential, and the Georgia D should be able to slow it down. That side of the ball will be stronger for the Bulldogs, at least initially. Spread-wise, if this line ends up inflating beyond three touchdowns I’ll probably reconsider but for now I still like the Bulldogs to cover.