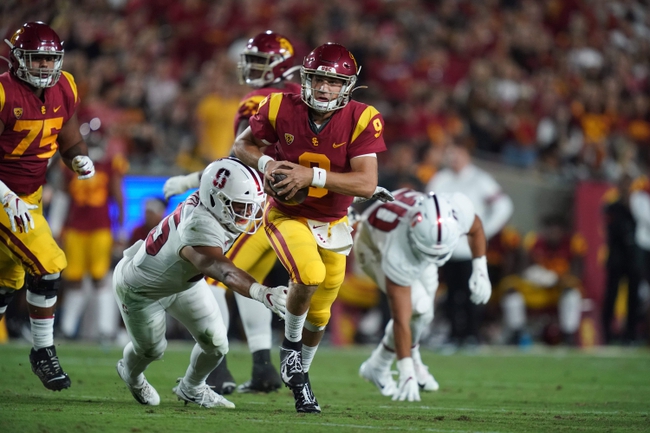 The Line: Stanford Cardinal +3.5 Click to Get Latest Betting Odds

USC finished 8-5 overall last season and 7-2 in Pac-12 play, but their campaign ended in disappointment when the Trojans fell to Iowa 49-24 in the Holiday Bowl. As for Stanford, they managed to go 4-8 overall in 2019 with a 3-6 Pac-12 record. It was the Cardinal’s worst finish since the 2007 season, and they'll be looking to make a significant improvement in 2020. Get Free College Football Picks and College Football Predictions for every game all season long at Sports Chat Place.

Let’s take a closer look at both teams and see if we can get an idea of how things may play out when the Trojans and the Cardinal meet up on September 19.

USC could have had a South Division championship last season if not for a Utah team that rolled through the Pac-12 at 8-1 and 11-3 overall; the next-closest teams to the Trojans’ 7-2 conference record were Arizona State and UCLA at 4-5. A bowl victory would have softened the proverbial blow, but that didn’t work out either. Now USC head coach Clay Helton moves into his fifth season with a new DC in Todd Orlando and a second-year OC in Graham Harrell. That crew marks something of an overhaul, but the good news is that USC should have a strong offense this season anchored by QB Kedon Slovis, TE Jack Yary and a host of talented receivers.

Over on the Stanford side, they’ve got some improvements to make over 2019. Last year’s team was in the basement of the North Division despite being projected to finish third. The Cardinal had some tough matchups on the schedule, but also had some injuries and let a few wins slip away. Head coach David Shaw will have a few options at QB (likely Davis Mills' job) and a good WR in Simi Fehoko, but will really need to invest in the running game and find a couple reliable guys there to balance the offense. Stanford has some solid leadership on the defensive side as well—notably CB Paulson Adebo—and should have a nice foundation for an improved unit there.

Pick: I like USC right now. Stanford is coming off a sour season—which they’re not used to having lately. That said, things are looking up for the Cardinal. If the team can avoid the major injury bugs that plagued them last season Stanford should show some significant improvement in 2020. All the pieces are there.

USC just seems like they’re on the verge of a breakout, which would be impressive in a difficult conference like the Pac-12. The stage is set for a big-play offense that should provide plenty of scoring, and if the Trojans can keep pace with fellow divisional teams like Utah, Arizona State and UCLA, USC has a great shot at making it to the conference championship game. Should be a really fun 2020 season in the Pac-12, so buckle up.