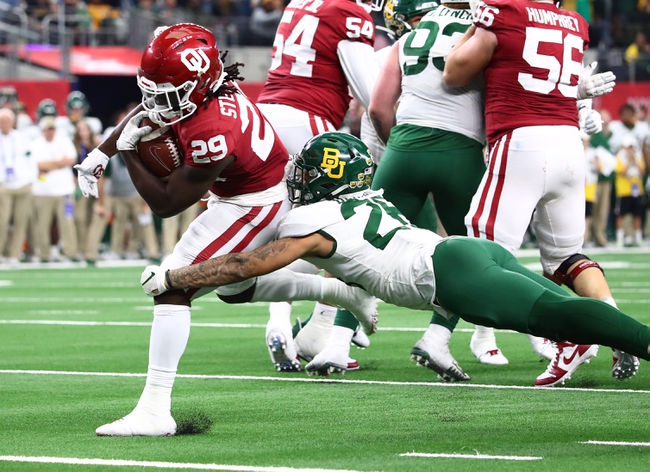 Baylor had a solid season in 2019, but the campaign ended in disappointment. The Bears went 11-3 overall, then lost the Big 12 Championship to Oklahoma in OT 23-20 and the Sugar Bowl to Georgia 26-14. As for Oklahoma, they had a slightly better overall record at 12-2 and got that huge Big 12 Championship victory. The Sooners’ season was stopped cold in the CFP Semifinal versus LSU however, as Oklahoma fell in a blowout 63-28. Get Free College Football Picks and College Football Predictions for every game all season long at Sports Chat Place.

Let’s take a closer look at both teams and see if we can get an idea of how things might play out when the Bears and the Sooners meet again on October 3.

Had Oklahoma suffered an off-year in 2019, Baylor would have cruised to a Big-12 championship. The Bears’ 8-1 conference record tied for first place, and the nearest competition was Oklahoma State at 5-4. The Sooners were a thorn in Baylor’s side however, as two of the Bears’ three losses last season came courtesy of Oklahoma. In any case, we move on to 2020 in the first season under new Baylor head coach Dave Aranda. His crew will try to get the offense a little more consistent this year, and we should see a nice attack for the Bears on that side of the ball. Four starters are back for the offensive line, and that unit may have to help out a potentially lagging defense this year.

Over on the Oklahoma side, they’re feeling pretty good about themselves this season despite the loss in the Peach Bowl. The Sooners had a few close calls during the 2019 campaign (namely the Baylor games, TCU and Texas), but a lone loss to Kansas State is really their only blemish leading up to the bowl. In 2020, coach Lincoln Riley will have a new starting quarterback for the fourth season in a row. We’re probably looking at redshirt freshman Spencer Rattler to take the reins, and he’ll have a nice crew of young receivers to work with—even though CeeDee Lamb and his 62 catches, 1,327 yards and 14 TDs are off to the NFL now.

Pick: I like Baylor. This should be a great matchup, and fans of anyone in the Pac-12 should mark their calendars for it. The Bears get to warm up with relatively less complicated games versus Ole Miss, Kansas, Incarnate Word and LA Tech before this one and should have a solid rhythm going by game five. As for Oklahoma, they’ll be going up against Missouri State, Tennessee and Army in the matchups leading up to this Baylor game. The Sooners won’t have any issues with Missouri State, but the Tennessee and Army games could be tricky. I think Baylor will be the more well-developed team at the point these schools meet, so I’m leaning toward the Bears to get in there and cover.