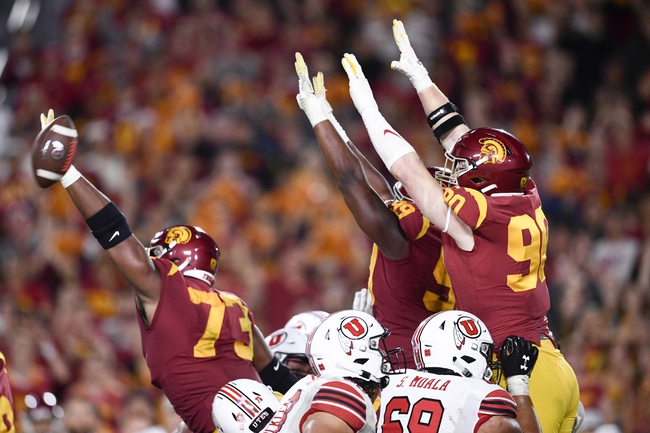 The Line: Utah Utes -1.5 Click to Get Latest Betting Odds

USC managed an 8-5 record in 2019, going 7-2 in Pac-12 play. That performance earned the Trojans a spot in the Holiday Bowl, where they lost 49-24 to Iowa. As for Utah, they finished 11-3 overall and 8-1 in the conference to win the South Division. The Utes fell in both the Pac-12 Championship Game (37-15 versus Oregon) and the Alamo Bowl (38-10 versus Texas). Get Free College Football Picks and College Football Predictions for every game all season long at Sports Chat Place.

Let’s take a closer look at both teams and see if we can get an idea of how things might play out when the Trojans and the Utes meet on October 2.

USC started out really great in 2019, rolling to a 3-1 mark which included wins over Stanford and Utah. The Trojans had some tough customers on the schedule after that and went 2-3 over the next five games but finished up the season well. One more conference win would have sewn up the division for USC, but the Washington and Oregon games weren’t all that close. In any case, 2020 brings USC head coach Clay Helton into his fifth year. The good news is that the coaching staff has some options at QB and should get nice production there. Replacing Michael Pittman won’t be easy, but USC has a couple of guys in Amon-Ra St. Brown and Tyler Vaughns who could step up and help out that production.

Over on the Utes’ side, they’ve got to be chomping at the bit for a rematch with USC. Utah’s only non-bowl loss was to the Trojans on September 20 of last year and knocked the Utes out of the top 10 national rankings. Moving on to 2020, Utah should have a very strong team once again, and USC should still be their main competition in the division. The Utes return a strong offensive line but will have to replace QB Tyler Huntley and RB Zack Moss. That’s not going to be a small task, but Utah does have some potential names who could step up. QBs Drew Lisk and Jake Bentley will get a lot of talk this summer. As for defense, Utah is always good there, but they’ve got some restocking to do after losing nine of their top 11 tacklers from a season ago.

Pick: As an early-look pick, I like USC to bang out a win here. Sure, the Trojans have some adjustments to make on the roster but they’ve got a lot of talent and not a ton of key losses. It may be difficult for USC to find an early rhythm, as they’ve got two tough customers in the four games leading up to this matchup in Alabama and Arizona State.

Utah’s path to this game doesn’t have as many big names, but does feature some solid schools like BYU, Wyoming and California. All three of those squads should be good this year, and they'll serve as a nice way to get an early look at the Utes. All things considered however, in this game I like USC by about a field goal.