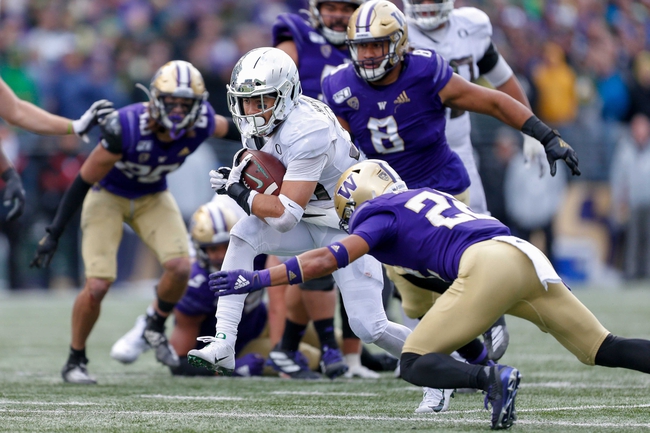 The Line: Oregon Ducks -7 Click to Get Latest Betting Odds

The Washington Huskies and the Oregon Ducks meet on Saturday, October 3 in college football action from Autzen Stadium.

Washington is coming off an 8-5 season in 2019, going 4-5 in a competitive Pac-12. The Huskies earned an invite to the Las Vegas Bowl, where they took out Boise State 38-7. As for Oregon, they went 12-2 last season, beating Utah 37-15 in the Pac-12 Championship Game and Wisconsin 28-27 in the Rose Bowl. Get Free College Football Picks and College Football Predictions for every game all season long at Sports Chat Place.

Let’s take a closer look at both teams and see if we can get an idea of how things might play out when the Huskies meet the Ducks on October 3.

Washington had some difficult Pac-12 matchups to deal with last season and didn’t do so well in the conference, but overall it was a great season capped off by the dominant Las Vegas Bowl victory. The Huskies probably could have scraped out a couple more victories versus teams like Stanford, Colorado or even Oregon and Utah, but all in all it was a nice campaign that ended on a high note. This year, head coach Jimmy Lake enters his first season with Washington. He’ll have to deal with some QB issues as the season draws closer; there are some options but no clear-cut starter at the moment. On the other side of the ball, inside linebacker will need to be addressed as well; that was a weak position for the Huskies last season.

Over on the Oregon side, they don’t really have much to complain about when it comes to the 2019 results. Sure, there was a tough opener loss to Auburn 27-21, and a bad loss to Arizona State on November 23, but aside from that the Ducks’ campaign was clean in the win column. Head coach Mario Cristobal enters his third season in 2020, and he gets a new OC in Joe Moorhead. They’ve got some QB decisions coming as well, since Justin Herbert has moved on after a great college career. We’re probably looking at Tyler Shough taking the reins, but we’ll see more as the season draws closer. The Ducks also boast a primo recruiting class, and there shouldn’t be a whole lot of talent turnover across most of the team.

Pick: I’m going Ducks. As an early-look pick, Oregon seems primed for another Pac-12 championship run. Sure, the Ducks have a lot of tweaking to do, namely at QB and the offensive line, but the defense should be really good this season and that will cover up a lot of growing pains on the other side of the ball.

As for Washington, they’re set up pretty well for a good season also. The Huskies have a bit of space to solidify things, and by the time the season rolls around the team should be ready to hit the ground running. The Huskies may even fight off Cal and flirt with the top spot in the North Division, but it’s Oregon’s to lose. This should be a great matchup regardless, so mark your calendars.