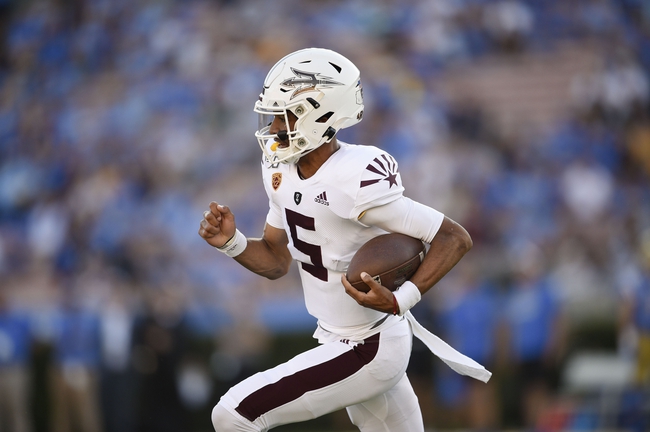 BYU posted an up-and-down campaign last season, finishing at 7-6 and earning an invite to the Hawaii Bowl. The Cougars fell in that game to Hawaii 38-34 to end the season in disappointment. As for Arizona State, they went 8-5 last year and 4-5 in Pac-12 play. The Sun Devils earned a trip to the Sun Bowl, where they took out Florida State 20-14. Get Free College Football Picks and College Football Predictions for every game all season long at Sports Chat Place.

Let’s take a closer look at both teams and see if we can get an idea of how things might play out when the Cougars face the Sun Devils on September 19.

BYU had some tough spots last season, but all in all the team did fairly well. The Cougars were sitting at just 2-4 after the first half-dozen games, but then went on a five-game winning streak to secure a bowl bid. BYU did leave a couple of victories out on the field, however. In any case, head coach Kalani Sitake enters his fifth season at the Cougars helm, and he retains a pretty strong offensive attack. One area of potential weakness for BYU is the wide receiver slot however, as the team lost their top three guys at that position from last year. Look for names like Gunner Romney, Dax Milne and Keanu Hill to take a step forward in 2020.

Over on the Arizona State side, they had a nice season in 2019 overall, but really couldn’t make much headway in a tough Pac-12, finishing at just 4-5 in conference play. The Sun Devils kicked off the season with two ranked wins and a 5-1 record, then went on a four-game losing streak before emerging victorious in their final three outings. In 2020, head coach Herm Edwards enters his third season at Arizona State with a new crop of coordinators. They’ll look for more consistency from the offense this year and try to find replacements for departed RB Eno Benjamin and WR Brandon Aiyuk. The good news is that Jayden Daniels is back in the mix and ready to take his next developmental step.

Pick: I like Arizona State, but not by much. BYU gets a couple of tough matchups coming into this game in Utah and Michigan State, so the team may not quite have their rhythm down by the time this matchup rolls around. Arizona State gets to ease into things a little more with games versus Northern Arizona and UNLV in the first pair, so I can see the development going a little more smoothly there. BYU should still have a bowl-caliber season, but provided the line doesn’t creep into double-digits I’m sticking with the Sun Devils.