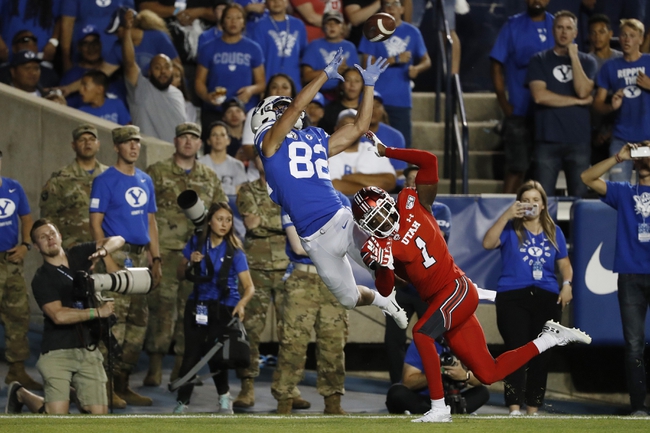 BYU is coming off a 7-6 season in 2019. The Cougars earned an invite to the Hawaii Bowl, but fell to the Rainbow Warriors in a tough one 38-34. As for Utah, they had a solid season overall at 11-3, but lost both the Pac-12 Championship Game (37-15 to Oregon) and the Alamo Bowl (38-10 to Texas) in their final two appearances. Get Free College Football Picks and College Football Predictions for every game all season long at Sports Chat Place.

Let’s take a closer look at both teams and see if we can get an idea of how things might play out when the Cougars meet the Utes on September 3.

In comparison to the rest of the independent schools, BYU did reasonably well last season. The Cougars’ campaign started out pretty rocky at 2-4 following some tough initial matchups, but a five-game winning streak sparked by a victory over Boise State propelled BYU into the Hawaii Bowl—though the ultimate result was disappointing. In any case, head coach Kalani Sitake enters his fifth season as BYU head coach, and he’s got a few things to tinker with before the campaign begins. The Cougars have a few solid options at QB coming into 2020, with Zack Wilson heading that group. BYU will also retain their top receiver from last season in TE Matt Bushman. That said, the Cougars lost all of their top three wide receivers to graduation, so we’ll be seeing some new names step into those roles.

Over on the Utes’ side, they’re still reeling after a promising season ended in disappointment with losses to Oregon and Texas. Outside of that, the Utes’ only other blemish was a 30-23 loss to USC on September 20. The Utes still have the inside track to the South Division championship, but they’ve also got some tough customers on the schedule in 2020. 16th-year head coach Kyle Whittingham will have to replace QB Tyler Huntley and RB Zack Moss, but there’s plenty of talent on the roster and the Utes boast a strong offensive line once again. Utah may stumble a bit out of the gate, but after a few games the team should be settled into a consistent rhythm.

Pick: I like Utah here. As an early-look pick, it seems both teams have some overhauling to do in their backfields, and at this point it’s not immediately clear who will carry the loads in certain areas on either side. Utah retains an experienced coaching staff and system, and shouldn’t have too many difficulties getting up to speed quickly.

As for BYU, they’re going to have to go through some tough schools in their first quartet of games—it’s Utah, Michigan State, Arizona State and Minnesota in succession right out of the gate. If the Cougars aren’t ready to go, those outings will all be tricky. BYU should still end up with a bowl-caliber season, but I like Utah better in this early matchup.