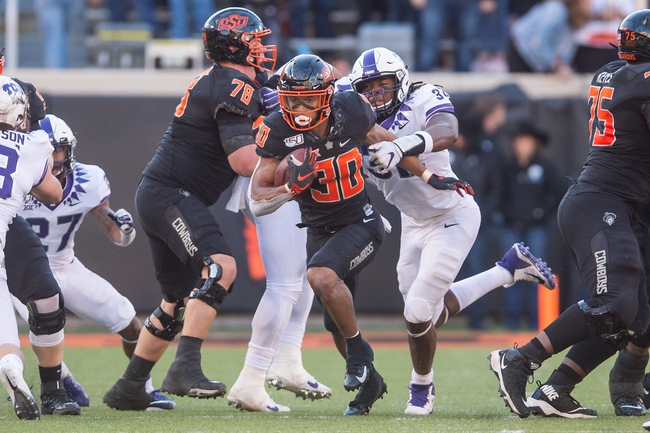 Oklahoma State is coming out of an 8-5 campaign last season, going 5-4 in the Big 12 for a third-place conference finish. The Cowboys made the Texas Bowl, where they lost a tough one to Texas A&M 24-21. As for TCU, they had a pretty disappointing season in 2019, finishing 5-7 overall and 3-6 in the Big 12, two spots out of the conference basement and ineligible for a bowl game. Get Free College Football Picks and College Football Predictions for every game all season long at Sports Chat Place.

Let’s take a closer look at both teams and see if we can get an idea of how things might play out when the Cowboys meet the Frogs on October 3.

Considering Oklahoma State plays in a conference with heavies like Oklahoma and Baylor, the 2019 campaign was a pretty solid effort overall—things just ended in disappointing fashion with the bowl loss. The Cowboys spent the latter part of the season ranked, and outside of the bowl they only had one loss to an unranked team (Texas Tech) all season. In any case, head coach Mike Gundy is back on the Oklahoma State sideline for his 16th year, and he’ll get a new offensive coordinator in Kasey Dunn. They’ve got a great offense to work with in 2020, and the Cowboys are going to need the scoring to keep up with the rest of the Big 12. Big play RB Chuba Hubbard is back again after rushing for almost 2,100 yards with 21 touchdowns last season; he’ll make a huge difference on that unit.

Over on the TCU side, they really couldn’t get much of anything going in 2019. After winning the first two games, the Frogs would’t get consecutive victories for the rest of the year, and the sketchy 2-5 stretch in the middle of the season pretty much sealed the team’s fate. TCU did get a nice win over Texas, and also beat solid teams in Purdue and Texas Tech, but there’s just not much else of note in last year’s campaign. Moving on to 2020, head coach Gary Patterson is back on the sideline in his 20th year with the Frogs. He’s got some work to do in order to get the team back to a bowl game, but QB Max Duggan is back with another year of experience and should take a step forward. The team will have to find a new lead receiver now that Jalen Reagor is gone; Taye Barber could fill that role this season.

Pick: Going Oklahoma State. There’s quite a bit of work to do for TCU coming into this season, and by game four I don’t think they’ll quite have everything figured out yet. Besides, Oklahoma State’s offense looks pretty intimidating, and if the Cowboys play to their potential (and field a solid defense at least), they could flirt with a conference championship.

As for TCU, I think they’re probably another year away from a bowl game, but they’re getting better and should show some improvement in 2020. The Frogs simply HAVE to find some receivers though. Once that offense gets clicking, it’ll be smoother sailing at least.