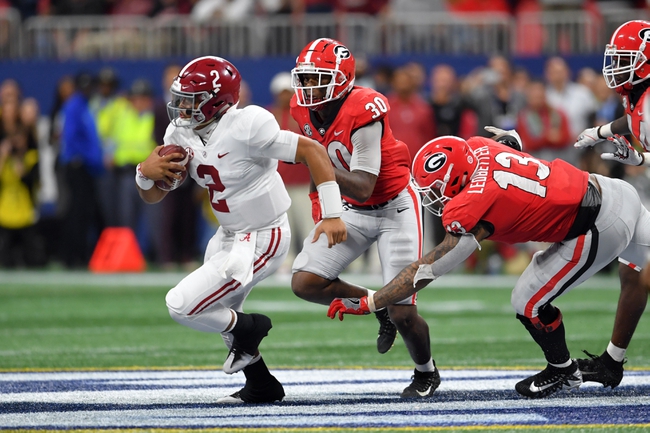 Alabama posted another solid season in 2019, going 11-2 overall with a 6-2 SEC record. The Crimson Tide finished second to LSU in the West Division, but did take out Michigan in the Citrus Bowl 35-16. As for Georgia, they had a great campaign as well, going 12-2 overall and winning first place in the East Division with a 7-1 SEC record. The Bulldogs lost big to LSU in the conference title game but beat Baylor in the Sugar Bowl 26-14. Get Free College Football Picks and College Football Predictions for every game all season long at Sports Chat Place.

Let’s take a closer look at both teams and see if we can get an idea of how things might play out when the Bulldogs meet the Crimson Tide on September 19.

There’s not a whole lot to complain about when it comes to Georgia’s 2019 campaign. The Bulldogs’ only loss outside of the SEC Championship matchup was a 2OT affair 20-17 versus South Carolina. That defeat dropped Georgia from No. 3 to No. 10 in the national rankings, but to their credit the Bulldogs clawed back up to No. 4 by the time the regular season finished. This year Georgia head coach Kirby Smart goes into his fifth season, and he gets a new offensive coordinator in Todd Monken. That duo has a tough task ahead in replacing three-year starting QB Jake Fromm; we’re probably looking at Jamie Newman or Stetson Bennett stepping under center for the Bulldogs this year, and it remains to be seen how much of a talent drop there will be.

Over on the Alabama side, they’re likely disappointed after falling behind a really good LSU team in the West Division last year, as the Tide were favored to finish first there. The matchup that buried the Tide was the Tigers game November 9, which Alabama lost 46-41, and the 48-45 loss to Auburn a few weeks later didn’t help matters either. In any case, the Tide got a bowl win and they’re looking pretty good for the 2020 campaign. Head coach Nick Saban enters his 14th season on the sideline, and he’ll have the luxury of choosing between two potentially solid starting QBs in Mac Jones and Bryce Young. Getting receiver DeVonta Smith back for his senior season after a 1,256-yard, 14-TD season is pretty big as well.

Pick: I like Alabama. As an early-look pick, the Crimson Tide just seem better prepared for this matchup. Sure, they lost pro-caliber talent to the NFL Draft as usual, but there are more than enough adequately-suited players on the roster to slot in. The Tide have a couple of games before this versus pretty good teams in USC and Georgia State; those should serve as nice warmup outings for Alabama, and by the time September 19 rolls around the team should be ready to roll. Anything under double-digits here seems doable for the Tide.