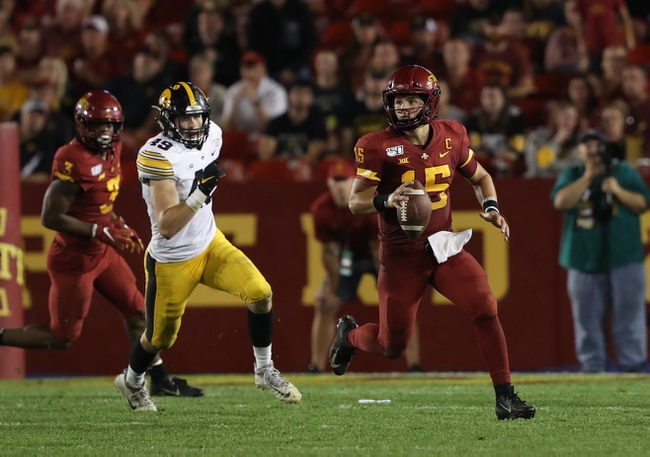 Iowa State managed a fairly solid season in 2019, going 7-6 overall with a 5-4 Big 12 record. The Cyclones earned an invite to the Camping World Bowl, where they lost 33-9 to Notre Dame. As for Iowa, they pulled off a 10-3 campaign last year with a 6-3 Big Ten record. The Hawkeyes won their Holiday Bowl outing versus USC 49-24. This early-season in-state rivalry matchup should make for a spectacular game. Get Free College Football Picks and College Football Predictions for every game all season long at Sports Chat Place.

Let’s take a closer look at both teams and see if we can get an idea of how things might play out when the Cyclones meet the Hawkeyes on September 12.

Iowa State was projected to finish a bit higher in the Big 12 standings last year, but considering how competitive the conference was their fifth-place finish at 5-4 is pretty understandable. The Cyclones suffered a tough 18-17 home loss to Iowa last season on September 14, one of four losses Iowa State had by seven points or fewer. Fifth-year head coach Matt Campbell will try to improve those close-game results this season, and he’s got a great shot at doing so with talent like QB Brock Purdy (who is already one of the school’s all-time best at the position) on the roster. The Cyclones lost wide receiver talent in Deshaunte Jones and La’Michael Pettway but still retain a nice core that should help the team put up big offensive numbers in 2020.

Over on the Iowa side, they should be pretty pleased about their 10-3 run in 2019, especially considering there were six ranked teams in the Big Ten last season and a lot of competitive talent. All three of Iowa’s losses came to ranked teams (Michigan, Penn State and Wisconsin), and all came by seven points or fewer. Head coach Kirk Ferentz has lots of great players returning from that team in 2020, with names like RB Tyler Goodson, LT Alaric Jackson and DE Chauncey Golston still on the roster. The bad news is that Iowa will have to find replacements for high-impact names like AJ Epenesa and Nate Stanley, but Ferentz is pretty used to dealing with turnover at this point so the results dip shouldn’t be significant.

Pick: I’m going to take a stab at Iowa State here. This is going to be a close game, and should be very competitive, but I think the Cyclones have made enough strides talent-wise to close the gap here and should be able to stick around. Iowa will also have a stout offense once again and I wouldn’t be surprised to see both teams score in the 30s. I like this one to be decided on a last-second score and serve as a nice jumpstart win over a rival to get the Cyclones’ season cooking. Should be a must-watch game, so mark your calendars.