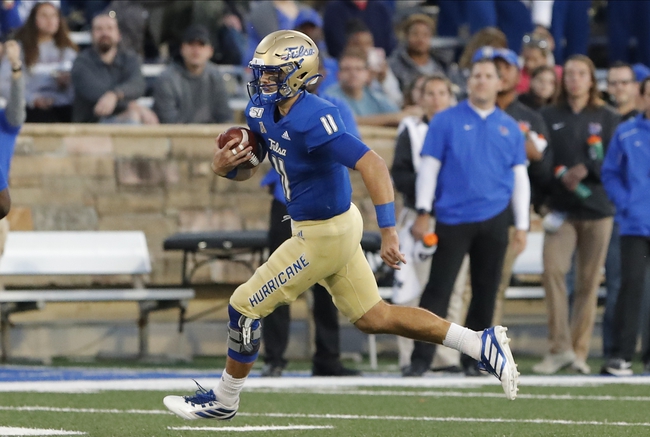 The Tulsa Golden Hurricane will be looking to qualify for a bowl game and move up in the AAC standings during this college football season.

Tulsa had a pretty rough football season in 2019. The Golden Hurricane finished at just 4-8 overall and 2-6 in the American Athletic Conference, leaving the team in last place in the West Division and out of bowl game eligibility once again. This year Tulsa will try to buck that trend and get back to postseason play as they reestablish themselves in the AAC. Check back all season long for free college football picks and college football predictions at Sports Chat Place.

Let’s take a closer look at Tulsa’s current status and break down their chances at hitting six victories this season.

Not a whole lot went right for Tulsa last season, and the team blew a few potential wins to destroy their bowl hopes. There was a 3OT loss 43-37 to SMU, a 42-41 loss to Memphis and a 38-26 loss at Tulane, any one of which would have added a feather to the Golden Hurricane’s cap and given them a little more confidence coming into this season. Weirdly enough, if you wanted to point to one specific area that cost Tulsa last year, it was field-goal and extra-point kicking (there were three missed field goals in both the Memphis and SMU games).

In any case, 2020 marks the sixth-year return of head coach Philip Montgomery, who is 25-37 overall in his tenure at Tulsa. The staff does have some returning talent to work with; QB Zach Smith and WR Keylon Stokes are back on offense, and LB Zaven Collins and CB Allie Green are back with the defense in 2020. The Golden Hurricane lost seven starters overall but the consensus is that they’ve still got some nice depth to replace them with. We should see a bit of a better offense and a slightly worse defense from Tulsa in 2020, so it remains to be seen how that will play out.

Looking at the schedule, there are six wins here, but Tulsa doesn’t have much room for error. A home win versus Toledo in the opener is doable, as are wins against teams like Northwestern State, East Carolina, Arkansas State and USF, but it’s going to take a win over someone like Toledo, Tulane, SMU or Navy to finish off that bowl bid.

Pick: Gonna go over. I’m putting quite a bit of faith into Tulsa with a six-win total, but the path is there, and if the Hurricane don’t regress too badly they’ve got a shot. Without some unexpected heroics the OK State, UCF, Houston, Cincinnati and Navy games look like penciled-in losses for Tulsa, but there’s enough meat left on the schedule to get to a half-dozen victories I think.