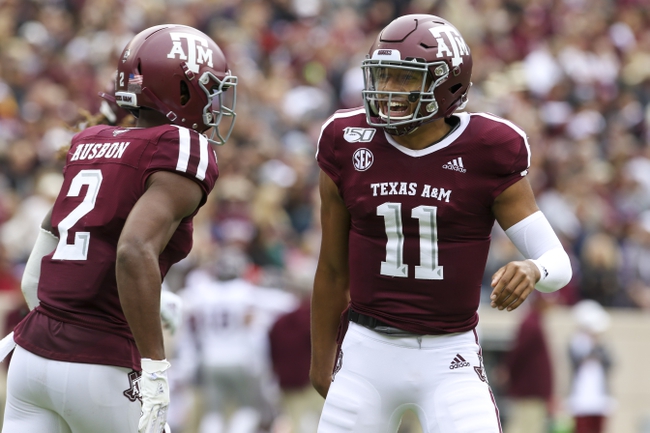 The Texas A&M Aggies look to step it up a notch in the SEC in the 2020 college football season.

Texas A&M managed a solid football campaign in 2019. The Aggies went 8-5 overall and 4-4 in the SEC, earning a trip to the Texas Bowl where they took out Oklahoma State 24-21. In 2020, Texas A&M is projected to take another step forward and compete with the top teams in the country. Check back all season long for free college football picks and college football predictions at Sports Chat Place.

Let’s take a closer look at Texas A&M’s current status and break down their chances at hitting double-digit wins this season.

When you’re in a division with LSU, Alabama and Auburn, finishing in fourth place with a .500 conference record is pretty darn good. Still, with the competition ratcheted up in 2019, Texas A&M had a daunting schedule. The losses all came against ranked teams in Clemson, Auburn, Alabama, Georgia and LSU; that’s the top talent in the country. Outside of that the Aggies didn’t have a whole lot of trouble in the regular season, unless you count the relatively close 24-17 win at Ole Miss.

Moving on to 2020, Texas A&M brings back head coach Jimbo Fisher and his crew in their third seasons. A lot of pundits are picking the Aggies to do some major damage on the national stage this year, as the team seems primed for a breakout. They’re going to have to get the offense a little more consistent as there was some trouble there last season, but a solid crew of blockers and QB Kellen Mond are back. Top receiver Jhamon Ausbon returns this season as well after posting 66 catches for 872 yards and five touchdowns in 2019.

Look, Texas A&M probably isn’t going to win the division this season. The Aggies have really difficult games at Alabama and versus LSU to close out the schedule, and it’s tough to imagine Texas A&M taking both of those. Even if the Aggies manage to split, one of the other teams will likely slide into that top spot. It’s just unfortunate for Texas A&M that they’re in one of the toughest divisions in football right now, but they can still have a really good season.

Pick: I’m going over. I think there are 10 wins here, but Texas A&M is going to have to play steadily and to their capabilities for the entire season. Those final two games against Alabama and LSU look brutal on paper, but who knows? If the Aggies are cooking in a great rhythm by then, maybe they can surprise everyone.