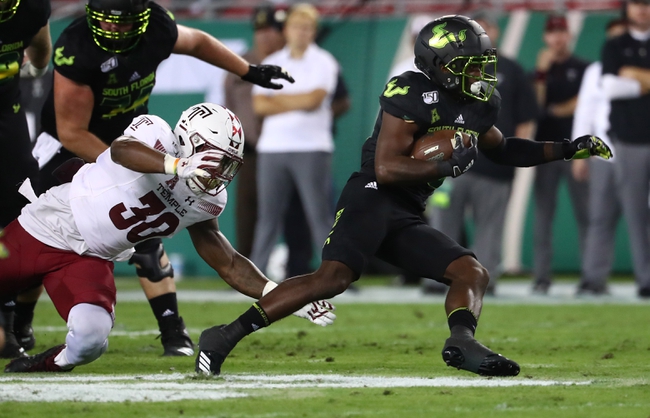 The USF Bulls have a lot of work ahead if they're going to collect a few more wins during this college football season.

South Florida’s 2019 college football campaign was a letdown. The Bulls finished at just 4-8 overall and 2-6 in the American Athletic Conference, leaving the team in fourth place in the East Division and out of bowl game eligibility. This season, USF will try to show some improvement in the record column and if all goes well maybe even qualify for a bowl game. Check back all season long for free college football picks and college football predictions at Sports Chat Place.

Let’s take a closer look at South Florida’s current status and break down their chances at hitting five wins this season.

USF showed some promising flashes last season, but just couldn’t get everything together. The offense was solid in the wins, with 45 or more points in three of the four games. That said, the Bulls suffered a lot of big losses as well where there wasn’t much scoring going on, like 35-3 to Navy, 48-21 to SMU, 34-7 to UCF, etc. It was only because of bad conference performances from the likes of East Carolina (1-7) and UConn (0-8) that USF managed to finish in fourth place in the East Division.

In any case, we move on to 2020 with a new coaching staff. Jeff Scott takes over the head role, and offensive coordinator Charlie Weis, Jr. and defensive coordinator Glen Spencer join him. This season will be useful to examine a heavy batch of solid young talent that the Bulls have coming in. The team may not be all that competitive this year, but some of the incoming names are promising. Returning defensive players Dwayne Boyles, Bentley Sanders and Nick Roberts, along with RB Kelley Joiner, should provide some solid veteran talent for USF as well.

Looking at the South Florida schedule in 2020, there’s a path to five wins—and if everything goes very well maybe even a bowl game—laid out. Sure, there are teams like Texas, UCF, Memphis and Cincinnati that USF probably won’t be able to compete with this year, but also a handful of winnable games like BCU, Tulsa and East Carolina. Steal a win or two along the way and who knows? It's certainly possible to see this squad winning six or seven games.

Pick: I like the over, but just barely. USF had a pretty rough campaign in 2019, but with a fresh regime and some solid-looking incoming talent there appear to be brighter days ahead. The Bulls probably won’t make a bowl game this year, but I do like them to improve over last year’s number and reach that five-win mark.