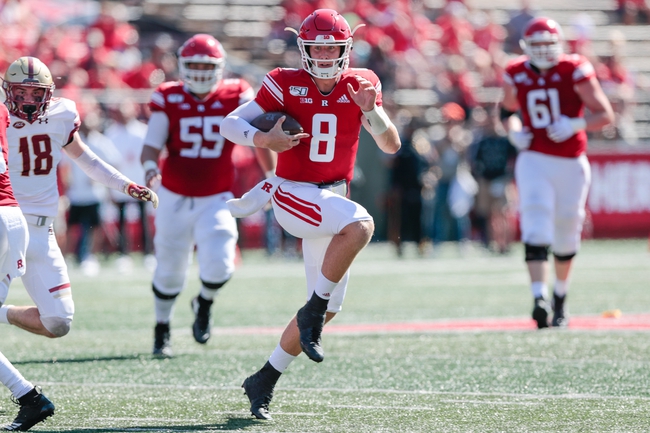 The 2019 Rutgers Scarlett Knights football campaign was surely another disappointing one.

The Scarlet Knights finished at just 2-10 overall and 0-9 in the Big Ten, leaving the team last in both the East Division and the conference. This year, Rutgers will attempt to add a couple more wins to their total and begin to prove themselves within the Big Ten. Check back all season long for free college football picks and college football predictions at Sports Chat Place.

Let’s take a closer look at Rutgers’ current status and break down their chances at hitting three wins this season.

Rutgers has now won a grand total of three games over their last two seasons, and 2019 was another forgettable one. The Scarlet Knights started off well enough with a 48-21 win over UMass (then had another one later in the year versus Liberty 44-34), but really couldn’t get anything going in their losses. The Knights were held to seven points or fewer seven times last season, and gave up a minimum of 27 points in every one of their losses. The team was grossly outmatched most times it stepped on the field.

How does Rutgers break the trend? Well, they’re going back to head coach Greg Schiano this year; he returns in his second stint and 13th overall season with the team. DC Robb Smith is back as well in his second stint and fifth overall year, while new guy OC Sean Gleeson is the rookie on the Rutgers sideline. The coaching staff will try to get some competition going for QBs Artur Sitkowski and Johnny Langan in 2020 to find some offense. The results from that position have been pretty meager over the past couple of seasons, and the Knights will really need to liven up that scoring capabilities in order to have any chance at winning games in this division.

Considering Rutgers plays in one of the most difficult divisions in all of college football, there are precious few soft spots on this schedule. The good news is that the Knights start off with relatively soft games versus Monmouth, Syracuse and Temple, then have winnable (on paper, anyway) outings versus Illinois, Indiana, Maryland and Purdue. It wouldn’t take too many upsets for Rutgers to make some noise here.

Pick: I like the over. Not that I’m super-high on the Knights this year, it’s just that the bar has been set so low. The return of Schiano will help inject some life into the team, and if they can take advantage of that energy there are certainly three wins to have here. After the bye week, you can pretty much forget about it (Michigan, Michigan State and Penn State), but Rutgers could already have their over hit by week three if everything goes well.