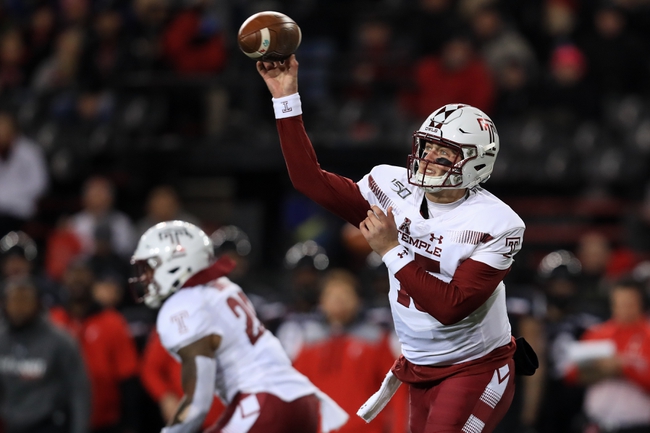 The Temple Owls look to bo bowling once again this college football season.

Temple had a pretty decent football campaign in 2019, but the season ended in disappointment. The Owls went 8-5 overall and 5-3 in the American Athletic Conference for a third-place finish in the West Division, but fell in the Military Bowl to North Carolina 55-13. In 2020, Temple will attempt to get back to a bowl game and bring home a win this time. Check back all season long for free college football picks and college football predictions at Sports Chat Place.

Let’s take a closer look at Temple’s current status and break down their chances at hitting six wins this season.

Temple came out of the gate pretty strong in 2019, rolling to a 5-1 start that included wins over Maryland and Memphis. Blowouts courtesy of SMU and UCF followed, but the Owls were able to get past South Florida, Tulane and UConn—while hanging tough versus Cincinnati in a 15-13 loss—in their last four games to get to eight wins. Temple really had no chance in the Military Bowl, dropping 55-13 to UNC. That makes consecutive years that Temple has been beaten in the bowl game by an ACC opponent; it was Duke doing it in 2018.

In any case, we move on to 2020, and Temple head coach Rod Carey enters his second season along with OC Mike Uremovich and DC Jeff Knowles. They’re going to be tasked with getting senior Owls QB Anthony Russo to take the next step in his development after throwing 2,861 yards, 21 touchdowns and 12 picks last year. Following a nice performance in 2019, the defense is going to need some attention at Temple as well, considering just 38 percent of that squad returns to the field this year.

Looking at the schedule, there’s certainly a path to six wins here. The slate starts out with a couple of tough matchups in the September group; road games against Miami and Navy. Things really start getting nasty with a road trip to Memphis in late October, and after that there are road games against Tulane and UCF.

Pick: I am going with the over. Temple will likely take a step back in the record column this season, as they’re dealing with a lot of turnover and a pretty stout schedule. That said, there are a couple of wins for the taking early in the year, and the Owls could already be at four victories by the time the Memphis game rolls around. That last part of the season is pretty choppy, but two more wins would do it.