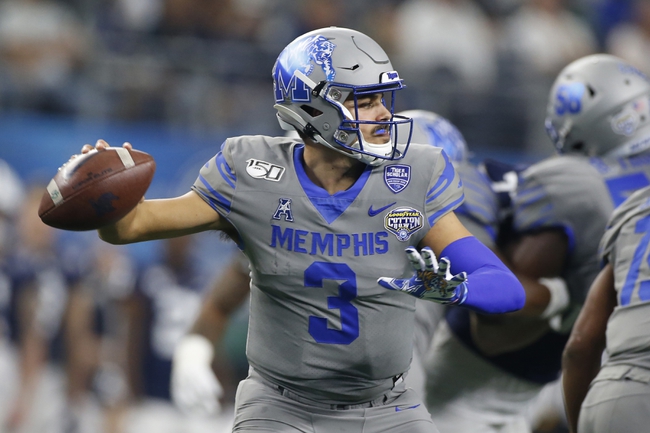 The Memphis Tigers look for continued success in the 2020 collegee football season.

Memphis had a great football campaign in 2019, finishing at 12-2 overall and champions of the American Athletic Conference. The Tigers’ season ended in disappointment with a 53-39 loss to Penn State in the Cotton Bowl Classic, however. In 2020, Memphis will attempt to retake the AAC and come home with a bowl game victory. Check back all season long for free college football picks and college football predictions at Sports Chat Place.

Let’s take a closer look at Memphis’ current status and break down their chances at hitting 11 victories this year.

Up until that final bowl game loss, Memphis doesn’t have much to complain about when it comes to the 2019 season. The Tigers eked out a West Division win over a tough Navy team right on their heels, and took care of Cincinnati in the AAC title game 29-24. Outside of that, a 30-28 loss to Temple was the only blemish during the regular season. In the Cotton Bowl Classic, Memphis coughed up 35 points in the first half and couldn’t gain much ground the rest of the way. All things considered however, it was a pretty darn good season for the Tigers.

On to 2020, which brings in the first year of head coach Ryan Silverfield along with second-year OC Kevin Johns and first-year DC Mike MacIntyre. The good news is that crew retains quite a bit of talent from last season including QB Brady White, who posted 4,014 yards with 33 TDs and 11 picks last season. He’ll be playing behind an experienced Memphis offensive line, who are returning 43 starts this year. In all, 73 percent of last season’s Tigers squad will be back. That's a pretty encouraging number.

Looking at the schedule for 2020, there are certainly some landmines Memphis will have to deal with. The Tigers open up against a decent Arkansas State team, then have three road games in a four-outing stretch before the bye. There’s a big game after the open week versus UCF, and a couple more difficult-looking road matchups at Cincinnati and Navy as the season winds down.

Pick: I’m going under. It’s not because I think Memphis will be bad this season; it’s just that the bar has been set pretty high after 12 victories in 2019. The Tigers shouldn’t have many issues with the majority of the schedule, but teams like Purdue, UCF, Cincinnati and Navy will likely cause troubles. Considering how competitive things should be in this conference I don’t think there’s enough room for Memphis to hit 11 wins—probably more like 8-10.