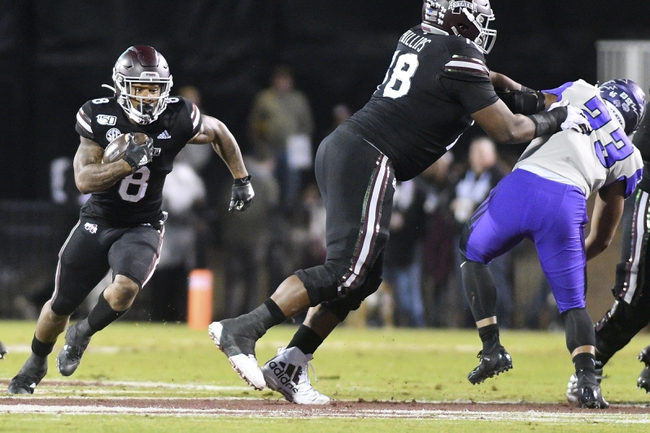 Look for big changes for the Mississippi State Bulldogs this college football season with the addition of new head coach Mike Leach.

Let’s take a closer look at Mississippi State’s current status and break down their chances at hitting seven wins this year.

The Bulldogs were pretty choppy in 2019, and didn’t win more than two consecutive games all year. Things started out pretty well at 3-1, but then Mississippi State went on a four-game losing streak during which none of the games were closer than double-digits. To their credit, the Bulldogs pulled off a 3-1 run at the end of the season to secure their bowl bid, but that didn’t turn out well either. All in all, it was just a “blah” season that Mississippi State would probably like to move on from.

Head coach Mike Leach takes over on the Mississippi State sideline for 2020 following the dismissal of Joe Moorhead shortly after the bowl game defeat. With Leach at the helm, the eventual prognosis for the Bulldogs is promising, but this season could be a rough one. Mississippi State has some tricky matchups on the schedule, and it’s going to be a fight to become bowl eligible this year.

Taking a closer look at that schedule, there are a lot of games that could be difficult in 2020. After New Mexico, the Bulldogs tangle with NC State, Arkansas, Tulane and Texas A&M before heading into the bye week. Mississippi State will need all the time to prepare that they can get, because the one-two-three punch of Alabama, LSU and Auburn (the first two being on the road) is the toughest stretch of the entire season. A road game in the Egg Bowl at Ole Miss ties up the season nicely, and that one could be make or break for the Bulldogs’ bowl hopes.

Pick: I have to go under. I can see ways that Mississippi State could hit that seven-win mark this season, but most of them just don’t seem realistic. With a new coaching staff coming off a weird offseason, it’s going to be difficult for the Bulldogs to navigate their way through this rough schedule and they’ll likely get worn down quickly. Six wins seems about right for Mississippi State in this rebuilding year in an always competitive conference, and there should be brighter days yet to come.