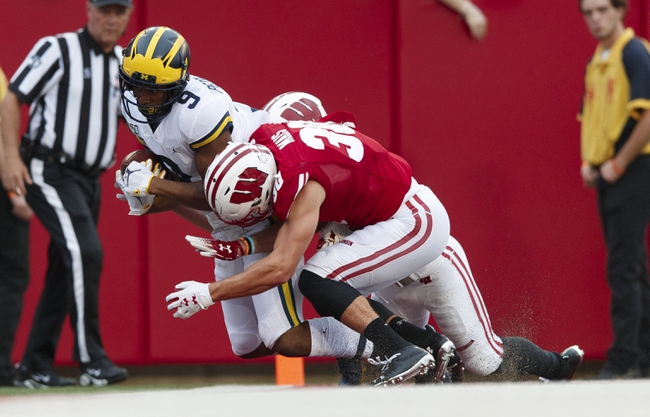 The Line: Michigan Wolverines -3 Click to Get Latest Betting Odds

Wisconsin is coming out of a nice 10-4 season overall in 2019, going 7-2 in Big Ten play. The Badgers lost their final two games of the year however: 34-21 in the Big Ten Championship to Ohio State and 28-27 in a tough Rose Bowl loss to Oregon. As for Michigan, they went 9-4 overall and 6-3 in the conference in 2019. The Wolverines’ season ended in disappointment as well with a 35-16 defeat by Alabama in the Citrus Bowl.Check back all season long for free college football picks and college football predictions at Sports Chat Place.

Let’s take a closer look at both teams and see if we can get an idea of how things might play out when the Badgers meet the Wolverines on September 26.

Going into the 2019 campaign, Wisconsin was projected to finish third in the West Division. The Badgers outperformed expectations by taking that division, but unfortunately in the championship they ran into an Ohio State juggernaut that went 9-0 in the Big Ten. Outside of the Buckeyes and the bowl game, Wisconsin’s only other loss was a 24-23 misstep at Illinois that knocked the Badgers from No. 6 to No. 13 in the national rankings. (Wisconsin gets a shot at home revenge against the Illini this year on Halloween.) Looking ahead to 2020, Wisconsin head coach Paul Chryst steps into his sixth year on the sideline. He’s got some work to do when it comes to filling talent gaps due to departures of players like RB Jonathan Taylor (2,255 total yards and 26 TDs last year), but does have an interesting duo of QBs in Jack Coan and Graham Mertz.

Over on the Michigan side, they had to deal with the Ohio State beast intimately last season as well, and also trailed a really good Penn State team in the East Division. That was an unfortunate result considering the Wolverines were projected to win that division; things got off the rails after a 35-14 loss at Wisconsin in the third game, and Michigan struggled in a lot of their ranked matchups after that. Sixth-year head coach Jim Harbaugh will try to fine-tune things in 2020, and he’s got some solid talent to work with in patching up the departures. We should see a healthy QB competition from Dylan McCaffrey and Joe Milton heading into the season; both are intriguing options.

Pick: I like Wisconsin to sneak in there. The Badgers get a nice run-up to this game after facing Indiana, Southern Illinois and App State, and by then things should be running smoothly on both sides of the ball. It’s going to be one of the most important matchups of the year for Wisconsin, and even though it’s tough to play at Michigan I think they’ll come in ready. If you’re a fan of the Big Ten, this one is a must-watch game and should be close the whole way.