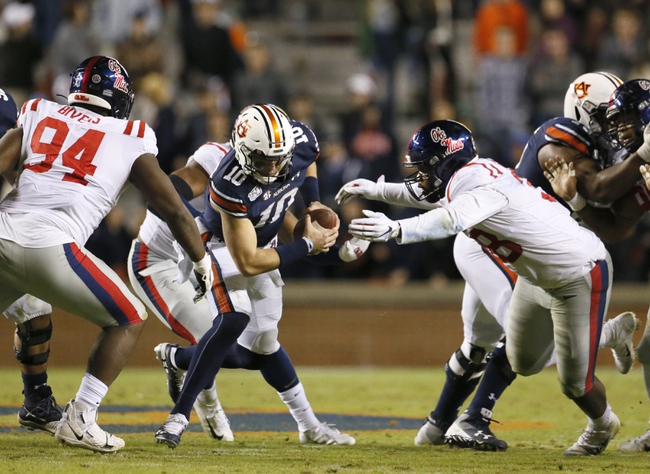 Auburn had a decent but ultimately disappointing season in 2019, going 9-4 overall with a 5-3 record in the SEC. The Tigers earned an invitation to the Outback Bowl, where they lost to Minnesota 31-24. As for Ole Miss, they had a forgettable campaign in 2019, with a 4-8 overall record and a 2-6 mark in the SEC. The Rebels finished one spot out of the basement in the West Division and out of bowl contention. Check back all season long for free college football picks and college football predictions at Sports Chat Place.

Let’s take a closer look at both teams and see if we can get an idea of how things might play out when the Tigers and the Rebels meet on September 19.

Considering Auburn was predicted to finish in fourth place in the crazy-strong Western Division last season, their third-place spot behind LSU and Alabama isn’t too shabby. The Tigers played everyone strong, and only lost to very good teams in Florida, LSU, Georgia and Minnesota. That said, the close Outback Bowl loss does sting; ending on a high note and double-digit wins certainly do have their appeal. Moving on to 2020, Auburn head coach Gus Malzahn enters his eighth season at the helm and gets a new OC in Chad Morris. They’ll have experienced QB Bo Nix back under center in 2020, and with a few adjustments that offense could be great. It's a tough Western Division to play in, but if a few things break Auburn's way they've got a good shot at taking it.

Over on the Ole Miss side, there’s not much to like about last season’s result. The Rebels had the third-worst record in the SEC, ahead of only one-win Vanderbilt and winless Arkansas. Ole Miss was the victim of a few heartbreakers in very close losses however, and their season could have been much better if not for a few scenarios. In any case, Ole Miss gets a change of regime in Lane Kiffin this season, and expectations are running high. The Rebels will have some key names back in the fold as well, like Matt Corrall and John Rhys Plumlee.

Pick: I’m going to go with Auburn here. Under different circumstances, I might be leaning toward Ole Miss, what with their strong returning batch of names and intriguing head coach hire, but as an early-look pick I just can’t go that way considering the strange offseason and little preparation time. Granted, the Rebels have a couple of games to tune up before this one and the team does return a pretty good bunch of players from last year's squad. That was an Ole Miss team that Could have been bowl-eligible if they'd been able to finish off a couple of those razor-close losses they had.

Auburn on the other hand is an experienced group and should be able to hit the proverbial ground running better than most. If the line inflates a bit as this one draws closer I’ll probably revisit it but otherwise I’m all Tigers here.