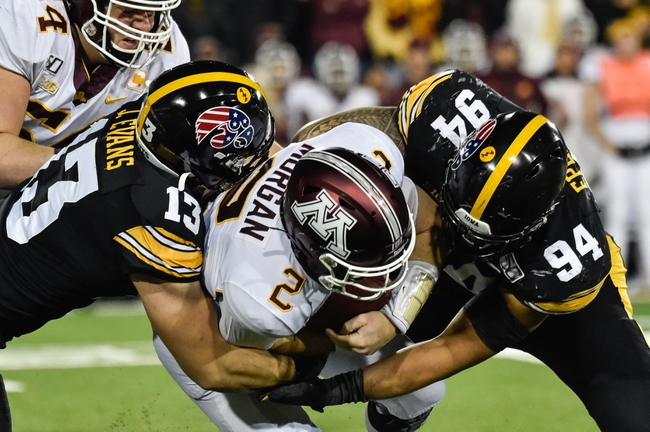 Iowa managed a pretty nice football campaign in 2019, going 10-3 overall with a 6-3 mark in the Big Ten. The Hawkeyes earned a trip to the Holiday Bowl, where they took out USC 49-24. As for Minnesota, they had a great season as well at 11-2 overall and 7-2 in the Big Ten. The Gophers also won their Outback Bowl appearance versus Auburn 31-24. Check back all season long for free college football picks and college football predictions at Sports Chat Place.

Let’s take a closer look at both teams and see if we can get an idea of how things might play out when the Hawkeyes meet the Golden Gophers on September 18.

Iowa was right in the mix in the West Division in 2019, finishing 6-3 and behind only Wisconsin and Minnesota at 7-2. The Hawkeyes made their way through some tough opponents last season, and their losses came to great teams in Michigan, Penn State and Wisconsin. (And they also managed to beat Minnesota 23-19.) Moving on to 2020, Iowa head coach Kirk Ferentz is in his 22nd season at the helm. He’ll have to deal with some big losses in names like QB Nate Stanley, OT Triston Wirfs, DE AJ Epenesa and DB Geno Stone, but does retain some top-shelf talent in LT Alaric Jackson, RB Tyler Goodson and DE Chauncey Golston.

Over on the Minnesota side, they were rolling right along last year, opening with nine straight wins capped by a victory over Penn State November 9. The Gophers dropped to Iowa and Wisconsin during the next three games however, and the loss to the Badgers really hurt since it prevented Minnesota from going to the Big Ten Championship Game. The Gophers probably would have lost to Ohio State anyway, and they did get the reaffirming bowl win, but still. In any case, 2020 brings the fourth season of Minnesota head coach PJ Fleck, who gets a couple of new co-OCs in Mike Sanford and Matt Simon. That pair will get a squad that returns nine starters and features some great names like QB Tanner Morgan and receiver Rashod Bateman.

Pick: I like Minnesota here. The Gophers seem like they’re in a pretty good spot considering the wacky offseason, and after a 2019 where they finished sixth in the nation in yards per completion, Minnesota gets six of their seven top receivers back and has a very physical crew. They should be able to stretch their legs on the scoreboard well in 2020 once the scheme is dialed in.

As for Iowa, they should return a pretty solid team as well, but comparatively speaking they’ve got some work to do filling roster holes. It won’t be difficult for the Hawkeyes to get into rhythm and by the time this game comes around I expect them to be rolling along well. Still, as an early-look pick Minnesota just looks like a better team on paper and I think the Gophers get some revenge with a win/cover. This one should be a pretty epic showdown and close all the way, so mark your calendars.